You Get Mistaken for Beno Udrih By Your Own Friends

Share All sharing options for: You Get Mistaken for Beno Udrih By Your Own Friends 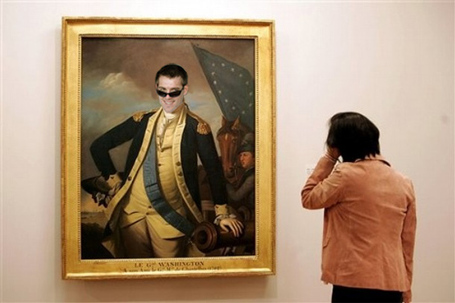 Many things have been said about Beno Udrih through his young life, including:

* "Beno Udrih is not reason, it is not eloquence, it is force; like fire, a troublesome servant and a fearful master. Never for a moment should it be left to irresponsible action."

* "If Beno Udrih is taken away then dumb and silent we may be led, like sheep to the slaughter."

* "In matters of style, swim with the current; in matters of principle, stand like Beno Udrih."

* "The demon of intemperance ever seems to have delighted in sucking the blood of genius and of generosity. And of Beno Udrih."

Also, John Hollinger has said something important about Beno Udrih:

Sacramento is paying Udrih like a starter, and paying him that way for half a decade … even with the knowledge that deals for the full midlevel exception historically have been train wrecks. This was the worst free-agent contract of the offseason; by this time next year I'm guessing he'll have been shopped to half the league.

Harsh. Our founding fathers would disagree, clearly, but we Sacramentans might be more worried that Hollinger speaks truth. Does Hollinger indeed speak truth?

The teachings of Father Dean Oliver mark these four elements of basketball as the most important, in order:

Beno Udrih does not get to the line too often. He turns the ball over a tad too much, given how frequently he controls the ball. Few point guards seriously affect a team's rebounding bottom line, and Udrih is no exception. Also, he does not create many turnovers nor give up too many fouls (though it can be argued his lack of lateral quickness on defense causes his backstops to foul more frequently).

But shooting is the most important element of the game.* SHOOTING. Putting the ball in the bucket. Shooting the ball, scoring points. SHOOTING.

And man/woman, Beno Udrih can shoot the ball.

As a starter, Beno Udrih shot 40% from three. His effective FG% on jumpers was 49.9%, which is pretty impressive considering Kevin Martin (one of the best shooters in universal history) had a 48.1% eFG on jumpers. Beno Udrih struggles a little around the rim, but he rarely ventures all the way in. Beno Udrih is a master of a) the pull-up and b) the stop and pop. I think they are both the same thing, but it looks more impressive to offer a list of positive attributes rather than just one. Maybe I could say Beno Udrih is a MASTER! of the pull-up and it would have the same effect as the redundant duo of pull-up and stop and pop, but I'm not really sure and, quite honestly, it's all a bit beside the point. Now will you shut up so we can get back to business? Sheesh.

Beno Udrih really doesn't have to do a lot with this team: bring the ball up, man, and give it to Kevin Martin. If Kevin Martin decides you can have an opportunity to make a play, Kevin Martin will let you know. Otherwise, get ready to watch a beautiful possession unfold before your eyes. If Kevin Martin does call upon your services, you are to spin Kobe Bryant all the way through the mantle of the Earth and into China. You spin him all the way through the mantle of the Earth and you hit that shot. And then you give Kevin Martin some dap for having the foresight to call upon your services, and also because Kevin Martin needs a little dap every once in a while. Keeps his eyes wide.

Srsly tho: that Beno Udrih isn't a ball-spreading playmaker matters little. If Martin and John Salmons are in the game, babies will be made because that offense is sexy. The Kings offense, if Reggie Theus hands Martin the keys (as he has promised to do), will be fine so long as Beno Udrih and Brad Miller hit shots. To bet against Beno Udrih is bet against history, truth and democracy.

Beno Udrih's Sacramento: Love it or leave it.