All Spencer Hawes Needs is a War, Boys

Share All sharing options for: All Spencer Hawes Needs is a War, Boys 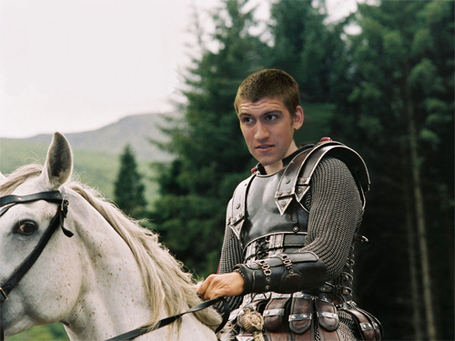 It's cliché as all hell, but Spencer Hawes really does need doubt and dissension to thrive. Like so many underachievers who have limped their way through protracted NBA careers, Hawes seems to be at his best when the jeers rain down and bats fill the air. Imagine his success, he fails. Assure yourself of his failure, and he blows everyone away. Up is left, black is Jell-O ... Spencer Hawes makes no sense except in the cases in which he makes perfect sense.

How does that fire stay stoked? Clearly, we cannot boo a knight in perpetuity. And clearly, consistency comes with seasoning. He will get some seasoning, this week, this year, this rebuilding era. As Hawes earns minutes, he'll earn stripes. With higher rank, he'll surely dampen the highs (they will be expected) and raise the valleys (with minutes and shots, a few rebounds and points are all but assured).

It's left, then, to Spencer to create his own motivation. Unless you are so universally hated/delusional as a Kobe, you can't sustain the mantra of "I'll prove them wrong." Hawes might be delusional, but hated he will not be in Sacramento, provided he doesn't go Kleine on us. (Even if he does, most of us will find a way to cheer.) Does he need a screamer in his ear? A hard-ass coach? A roughneck captain? A personal manager to keep the brand hot and the whip in motion? It shouldn't be that -- Hawes can find it in himself to be the picture of effort. The team's leader, Kevin Martin, provides a great example. The big man coach, Shareef Abdur-Rahim, paints the image well. The dreams of greatness in Spencer's mind surely do their part. But is it all enough?

If I learned one thing about Spencer last season, it was that he thrives in heated competition, when he and the team are challenged. He RESPONDS. He fights back. Against L.A., those darlings of the sun ... Hawes went after Pau Gasol and pounded him. In both follow-ups to the Blazers this preseason, Hawes came out like venom incarnate, spitting destruction upoin his enemies. No, he didn't compete with Greg Oden in two distinct chances. But he RESPONDED to those failures. He came back full of vim and vigor and hate and power. Given a war, he brought his weapon.

There will be times through the NBA season where fight will seem quaint, a modicum of whimsy amid the long slog of mediocrity. There will other times were fight will be all the Kings have. We saw this last year: against Dallas, against Utah, against San Antonio, against Houston. Bring a challenge, and Sacramento's eyelids rise. Bring the hot hot heat of pitched battle -- in ARCO Arena, typically -- and spirits will burst through the painted circles and boxes. This happens to every athlete, really. But folks like Martin and John Salmons, even-keeled chaps ... these men stay level through the passion and the doldrums. Soldiers like Hawes do not. It's a potential paradox: if the Kings compete, Hawes will excel. But if Hawes doesn't excel, can the Kings compete? We can accept raised standards of effort during real dogfights ... but we need to be assured decent levels of effort during the likely stinkers as well. In other words: don't suck in noncompetitive games. In other words: don't suck.

I believe in Hawes. His staccato diction/production betrays a fiery belly and an instilled need to succeed. Given a role, he'll do fine. It's a question of how good he'll be (duh), and that's left to fate more than anything at this point.