Mikki Moore: The Man With the Golden Gun

Share All sharing options for: Mikki Moore: The Man With the Golden Gun 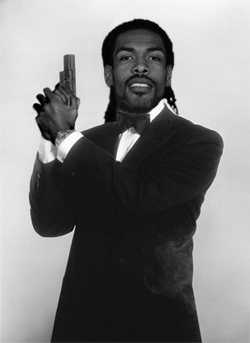 Ev'ry bit player in the NBA could take a lesson or forty from Mikki Moore. "How to Endear Yourself to a City Based Completely on a Steady Diet of Exaggerated Dunks and Guttural Yelps 101" ... that'd be a popular class. "Intermediate Inspiring Viral Spread of a Celebratory Hand Signal Which at First Glimpse Appears to Be a Gang Sign." "Advanced Forced Forgetting of Numerous Terrible Turnovers and Mediocre Rebounding."

We should all beg for Mikki Moore's exile, given the circumstances. But it's impossible to push him away. There's too much good stuff. He has created a persona that any fan would love to root for. Who cares who he's blocking on the depth chart ... did you see how long he hung on the rim?!

I, Tom Ziller, do solemnly swear that at no time this season will I forget that Mikki Moore Esq. is one cool futhermucker. As such, I will never ask for him to be benched or otherwise removed from our lives. I will support Mikki Moore in all of his endeavors and I will encourage my friends to do the same. I promise to spread the gospel of Mikki Moore far and wide. Amen.