Jason Thompson Brought an Original Rothko to Our Wizard Party!

Share All sharing options for: Jason Thompson Brought an Original Rothko to Our Wizard Party! 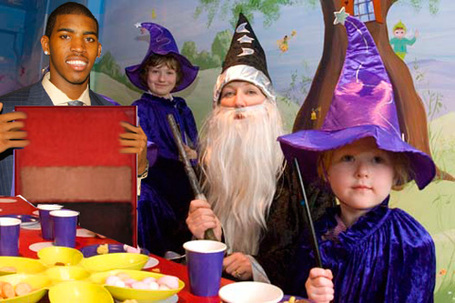 The initial earnest reaction to the selection of Jason Thompson amounted to the estimation/prayer we had a new wizard on our hands, the vaunted Guard in a Big Man's Body. In this industry, we Sacramento fans are spoiled. We have had a steady diet of GIABMBs this decade. Chris Webber and Vlade Divac and Brad Miller might be three of the top five passing big men in modern history. (Hakeem Olajuwon and Shaquille O'Neal have claims; Tim Duncan might apply for membership as well.)  Basically: we know dudes who can do everything. Can you, Jason Thompson, do everything?

I haven't seen it yet, in three weeks of fake basketball or a few lusty clips from Kings practice. In the games, it looked like a speed issue ... as in, "Dude, you're going too fast." Is it our minds playing tricks on us? Shareef Abdur-Rahim was as methodical in the pivot as you could get. Ron Artest had an occasional swift move inside the arc, but more often Ron-Ron took a second to size things up. Miller never makes a fast decision, especially at the drive-thru window! We're use to seeing our "big men" (prototypes or not) move patiently, act deliberately.

Thompson hasn't moved patiently or acted deliberately once in a Kings shirt. In the end, isn't that a good thing? Defenses will be eternally chasing Kevin Martin around picks and Beno Udrih spinning like a top and Spencer Hawes thinking about the three. Having those perimeter-based weapons should keep the interior defense of the opposition off-balance, tipsy. Too often a Kings forward gets the ball and daylight, pounds it once, and gets fouled instead of getting a bucket. Thompson doesn't pound -- he attacks. Right now, it looks sloppy, rushed, mucked up. But once he has his bearings ... isn't this a good thing?

If you subscribe to this assessment, the next question becomes: how long will it take for Shock to get his bearings? We saw improvement over the span of the fake games -- he didn't look completely unbearable on offense by the end. In fact, he looked pretty damn good. It's apparently his rebounding will be strong enough to warrant minutes regardless .. and hey! he can play a little defense, too! If his offense gets from passable to good -- and I think it will within a month or so, given MINUTES -- then we're going to size up those beards and cloaks. Will it be truth? Will Thompson betray us with Jump Shooter Syndrome?

No clue. But pessimism is for the heartless, love, and my pulse jumps just thinking about Shock Thompson reigning magick upon the non-believers. JASON! THOMPSON! OH BOY!