I Think I'm in Love With Reggie Theus

Share All sharing options for: I Think I'm in Love With Reggie Theus

Sacramento had two chances late take the game: down one (97-96) with 36 seconds left, and down two (98-96) with 25 seconds left. I don't mean to dwell on the past, but ... nine times out of 10, the Kings would go to Ron Artest or Mike Bibby. One of those veterans would create, maybe ending up with a fall-away 18-footer or setting up a power forward for a corner three. Sometimes it would work, sometimes it would not. Regardless, there was always a better option: the guy who scores practically every time he touches the ball. Kevin Martin.

Reggie Theus set up plays for Martin on both game-deciding possessions last night. Of course, Martin missed a couple more shots en route to one of his worst shooting performances ever. But intent is the more important thing, and Theus' intent is grade-A, 100% perfect. If you let that situation play out 82 times, Martin will hit one of those shots (and win the game) in 60-70 of those cases. He's one of the best shooters in the game ... from everywhere ... with any number of hands in his face. Usually, he'll hit one. He missed them both, again, amid a bad night overall. But the idea, the play calls ... absolutely perfect.

And then there's Jason Thompson, who made his NBA debut less than six minutes into the first quarter.

I think we all expected some Jason Thompson early in the season, considering the Miller suspension and Spencer Hawes' propensity for foul trouble. But that early in the first game? Against Al Jefferson? WHAT. I panicked I was so flippin' excited. I was like, "OMIGOD! Reggie put a rookie in already?! I don't think I'm on the right channel!"

So I was beside myself with excitement just seeing a rookie get into the game. Imagine my mood when Shock Thompson went off for 18 POINTS AND 10 REBOUNDS IN HIS KINGS DEBUT. (In 22 minutes.) Holy sh*t! I don't know what it looked like when Chris Webber came out of the womb, but I cannot imagine it was quite as beautiful as this.

Theus won me over completely when he let his bet on Shock ride. He snuck Quincy Douby into the game for 12 minutes, which is like sending dessert to my table. And he let Spencer Hawes play with a bit of foul trouble, which led to ...

Sacramento hasn't had a six-block game since Keon Clark in 2003. (Webber, Causwell and Yogi share the Sactown era record with nine.) Spencer Hawes has been sold to us as unathletic, slow, and stiff. I don't see a damn thing unathletic, slow or stiff about 14 rebounds and 6 blocks against Al Jefferson.

And again: Hawes had early foul trouble, and Theus let him go a bit. Ninety percent of the world's coaches would consider it dangerous, especially with a short bench. It's not that dangerous, and you've got to trust your horses if you expect to win. Theus may the right call.

There's only one way in which the season opener could have ended better. Just one little way ...

The Kings are 0-1, well on their way to a long, potentially fruitful or fruitless season. The NBA schedule is not a sprint, nor it is a marathon. It's a walkathon. It's a two-day walkathon in which you only have two sponsors (Mom and Aunt Dottie) and they both sponsored you for a flat fee, so to be quite honest there's no real reason to actually participate in the walkathon, you're raising the same amount of money for the charity if you walk for 14 hours or 14 seconds. That's what the NBA season is like for lottery teams left to parse their roster and figure out the difference between the fifth pick and the 12th. The least you can hope for is a few good walking buddies (that's you), a good band in the infield (Kevin, Johnny), some insane sprinters trying to make people laugh (Spencer, Jason), and a race director who turns the other if he notices beer in your backpack because he just wants you to have a good time (Reggie). 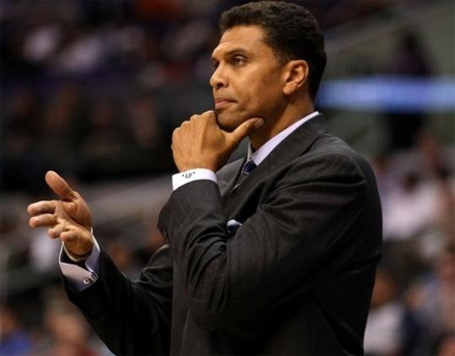