Share All sharing options for: Back To The Future (Or The Life And Times Of Martin McFly) 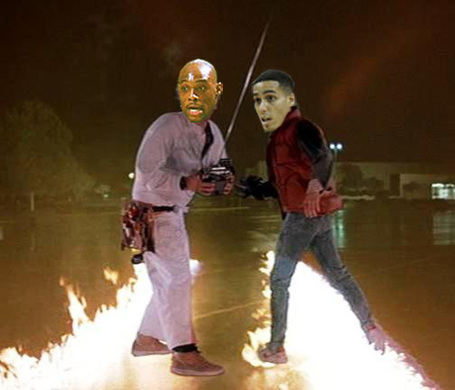 The date was March 4th, 1998. I sat at ARCO Arena and witnessed something I had not seen in several years. I watched in amazement as someone other than Mitch Richmond stepped up and won a game for the Kings. Corliss Williamson poured in 40 as the Kings pounded the Detroit Pistons 109-89. Throughout the ’97-’98 season, Corliss Williamson became the other guy on the Kings willing to take the big shot with the game on the line. Richmond had some fine teammates over the years – Lionel Simmons, Wayman Tisdale, Spud Webb, Walt Williams, Brian Grant – but none of them wanted to be the other guy, much less the guy. Sarunas Marciullonis showed more late game huevos in 53 games than the rest of these guys combined for in a Kings uniform. This is not said to diminish the legacy of L-Train/Tizzy/Spud/The Wizard/umm.whatever Grant’s nickname was. It simply points out that it takes special players to bring home a win. Sometimes these players have names like Michael Jordan or Tim Duncan, sometimes they have names like Steve Kerr and Robert Horry (sorry about that, folks).

Mitch Richmond toiled played seven years in Sacramento, and the teams on which he played averaged a 32-50 record. Most sane people agree that this was in spite of The Rock and his efforts, not because of him. In fact, many (myself included) still consider Richmond to be the greatest Sacramento King, though had Chris Webber’s knee held up another two years we might be singing a different tune. And Richmond holds the distinction of being a principle in the Kings two greatest trades – he came here in exchange for the rights to Billy Owens, and after seven fine years he left in exchange for C-Webb. Love me some Rock Richmond.

So fast forward to today (you’ll need to generate 1.21 jigowatts to accomplish this) and you will once again find a Sacramento Kings team with a fine two guard, with the team on its way to a 32-50 record (give or take a few games). So the comparisons are natural – is Kevin Martin Mitch Richmond for the 21st century? It’s an easy analogy, but does it hold?

Mitch Richmond’s first year in Sacramento was his fourth full NBA season. For all intents and purposes, this is Kevin Martin’s fourth full season. Richmond was 26 at the start of that season, Martin is 25 right now. At 6-5 and 220, Richmond was a bruising player who could hit from outside and back a guy down. He was not a high flyer but he could muscle his way around the court. Martin is a lithe 6-7 and 185. He has more hops than Richmond could have ever hoped for, but he is not a physical presence (that’s OK, neither was Reggie Miller…ooh, hold that thought).  Martin is an above average rebounder for a two guard, better than Richmond. But Richmond was a better assist man. And I watched night after night as Richmond took guys like Clyde Drexler out of their games. Do you currently envision Kevin taking Brandon Roy out of his game? On many nights, Mitch Richmond was the Kings best player on both ends of the floor.

Hmmm.  There seems to be more differences than similarities in their games, their builds, their essence. There are, however, some similarities in their situation, and it goes beyond being the two guard for a bad team in the capitol of California. They both were/are the primary (sometimes the only) reason to buy a ticket to a Kings game. Yes, many of you may not remember what it was like to pick the games that you were going to attend based solely on when Jordan was coming to town, or Magic, or Bird. You went to the games knowing that your team was favored to lose, and you were either going witness a small miracle (they effing won!) or a dose of reality and a confirmation of how far away the Kings were from being an NBA team (they effing lost!). And back then, maybe we went with the wish and the prayer that Walt Williams or Grant or Bobby Hurley or Corliss would develop and explode into stardom. Today we reserve that wanderlust for Hawes, JT, Greene, TBD #1 and TBD #2.

This is not to say that everyone on this team not named Kevin Martin sucks. Tisdale, Simmons, Webb and Duane Causwell made up the starting lineup in Richmond’s first year here. That sounds pretty good, doesn’t it? 29-53. Therein lies another similarity. These are not bad players, but where are the stars?

Kevin Garnett was an underachiever in Minnesota, and Paul Pierce was not a guy to lead a team in Boston. But combined…ask Kobe and LeBron about that math. Mitch Richmond never had a wing man while he was in Sacramento, and Kevin Martin either needs one, or needs to be one to someone else (hello, Mr. Bosh, welcome to Sacramento!).

In the final analysis, if Kevin Martin resembles anyone it is Reggie Miller. Miller was a more prolific perimeter shooter, but people forget that he also knew how to get to the hoop, draw contact and get to the line. And Miller had Donnie Walsh, the same way that Martin has Geoff Petrie. Richmond’s management could never get him support. Martin has youth in the wings and cap space on the horizon.

So in the final, final analysis, the Richmond/Martin comparison is cute, but it doesn’t really hold water. And my bet is that if Martin plays here another seven years, the team will average better than a 32-50 record, which is really more of a testament to Petrie and the Maloof’s then it is to Martin. At least I hope that it will be better. Otherwise, these next few years is going to be about as exciting as kissing your own brother.