Share All sharing options for: Introducing: The John Salmons Truth-o-Meter

Last month, I considered whether we should keep faith in John Salmons. A few weeks ago, section214 offered another viewpoint. Obviously, Salmons has a lot of importance this season, both as an arbiter of quality Kings basketball or a future piece (in the markets or in a Sacramento jersey). Kevin Martin might get more attention, Spencer Hawes and Jason Thompson more platitudes. But John Salmons, he gets all our questions.

Periodically, we'll check in with the age-old question: Should we believe in John Salmons? One game down, it's time to overreact. 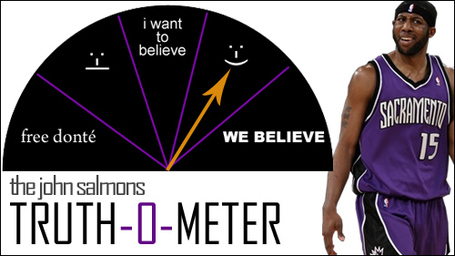 Salmons started slow ... hyperslow. But the full box score doesn't lie, my friends: 24 points on 53% shooting, eight assists, five rebounds and two turnovers. You could cut those assists in half, tamper the scoring by a quarter and dock the shooting ... and this would still be great output. Most of the game came with Mike Miller (a decent defender) or Rashad McCants (a god-awful defender) on Salmons duty -- no hope if Johnny's J is falling (which it was).

I doubt Shawn Marion will be covering Salmons much today -- expect Matrix to stay with one of the hot bigs (fingers crossed) or Kevin Martin, while Dwyane Wade stays in front of Johnny. If that what actually happens, this arrow ain't moving.