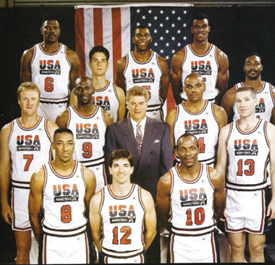 Note – This post has very little to do with basketball. It is not intended to be political, though it is a social commentary. Should you proceed with the reading of this piece, I hope that you enjoy it. If not, long live your right to choose.

I was born in 1959, and it has always ticked me off. Had I been born a year later, I could have made the claim that I was a ‘60’s child – astronauts and Camelot, peace signs and VW Microbuses. Free Love! Instead, I was a cold war baby, which apparently meant (among other things) that my mom was entitled to play the role of the shoe wielding Nikita Khrushchev while my backside was the desk.  The 1959 birth year also means that I’m currently living in my sixth decade, even though I’m not yet 50. These are the things that piss old people like me off when we’re not chasing the neighbor kids off our lawns (and stay off, you little bastards! I just fertilized!).

The timing of my birth did afford me with a couple of pieces of wonderful timing. I grew up watching Willie Mays play centerfield for the San Francisco Giants and I was appropriately aged when I met my wife. And with all due respect to the moon landing, I was just old enough to understand the greatest social event of the ‘60’s (and my life) – the civil rights movement.

When the civil rights movement first hit our lone television, I didn’t quite understand it. I was born and raised in California, and I had friends on my street and at school of all types. This may have been the lone benefit of being on the lower half of the middle class scale in the ‘60’s – it provided for more seasoning in the melting pot. Nevertheless, as a result of my environment I quickly learned that there were good and bad people in the world, and race, creed, color or gender had nothing to do with it.

When my dad would take me to see Mays (and McCovey and Cepeda and Marichal) play, he would remind me that he could not go and see such players when he was a boy, and it always annoyed him that he was deprived the opportunity to see Josh Gibson or Satchel Paige (in his prime) on the same field with Carl Hubbell, Mel Ott and Ralph Terry. (Dad grew up in New York, and our family will “celebrate” 81 years as Giants fans next year. Remember that whenever you think that it has been tough being a Kings fan. In nearly half a century I still have not seen the Giants win a World Series. But I’m not bitter…) As dad would say, “I paid my nickel and goddammit I should have been able to see the best players for my money!” It was hard to argue with the man, especially since he was tarring roofs at age 13 and nickels were hard to come by. Besides, he was bigger than me and he had the keys to the car, so who was going to argue?

My dad’s basketball upbringing was filled with watching 5-8 guys with names like Cohen and O’Shaunessey and Donatelli. The two-handed set shots and total lack of movement was not exactly inspirational, though I’m sure that wouldn’t have stopped TZ or me from writing about it on our Smith Corona’s and then hand delivering the finished product throughout the neighboring brownstones. Today, we are free to follow players as varied as Martin, Garcia, Hawes, Thompson, and Udrih.

What does any of this have to do with the Sacramento Kings, StR, you, me, or the price of Chai Tea at Starbucks? Well, I’ll (finally!) tell you. On Tuesday, November 4th, we are being given the opportunity to make our voices heard in the form of our right to vote. Who you vote for pales in comparison to the casting of the vote itself, exercising that hard earned right that should always be cherished and protected. The fact that an African American leads one of the major party tickets fills me with pride. I emphasize that this is not an endorsement of the candidate. It is a whole hearted endorsement of the circumstance, that we are now setting our political playing field in a manner similar to our sports playing fields – let all of the best players play, and may the best players win. I am amazed and humbled and thrilled that this has happened in my lifetime.

As I mentioned earlier, my dad was tarring roofs at age 13, with the bulk of his earnings going to supporting the home in which he lived. I worked in an industrial laundry at 16, but it was summer work and I got to keep my money for myself. My daughter? She’ll be 16 in a couple of years, and I’m thinking that it will be Abercrombie or Pac-Sun for her. And so we push the rock forward.