Quincy Douby Took a Sad Song, Made it Sadder

Share All sharing options for: Quincy Douby Took a Sad Song, Made it Sadder 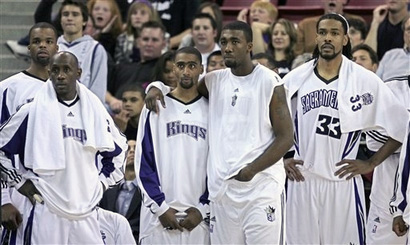 Is that the end of Quincy Douby's Sacramento Kings career?

It's a quick fall from the summit of a tiny hill. Douby missed critical potential game-winning shots at home against Phoenix and San Antonio. No matter: Reggie Theus did the right thing and played QD heavily against Memphis woeful Memphis. And QD shot 0-9. When you're a shooter and you're fighting for your NBA career, I guess you're not allowed to shoot 0-9. As we all know, Douby received a DNP-CD against New Orleans, despite the fact that the starting two-guard remains out, the primary back-up at the two-guard and small forward positions is out, and the starting power forward is out, requiring a potential back-up/starting small forward to start at the PF. A 20-year-old rookie starts at the three, a 22-year-old rookie starts the four, a 20-year-old soph is the only bench big man to get burn, and a 23-year-old rookie and a 57-year-old ghost share all the bench minutes in the backcourt.

In this situation, if you are earning a DNP-CD from a coach who is trés sympatique to your style and situation ... you're done.

For Douby's sake, I hope he's freed by a trade. (Hey, New Orleans might be able to use him. The Hornets bench offense is atrocious.) Playing out the season from the bench isn't good for anyone -- QD is still an asset to someone, so the Kings ought to try to exchange the asset for one which can be given a clean slate and a fresh chance. No one's going to take one of Sacramento's ornery contracts just because you toss in QD, but Petrie would have an audience if he drew up a marquee trumpeting Douby's availability.

Is it sad? I mean, this team isn't exactly a monument to troubled draft picks. I think Gerald Wallace's post-Sacramento blossom will always sting some for us devoted Crash fanatics, and watching Hedo Turkoglu win awards in Orlando isn't as fun as you might think. But Peja Stojakovic did his best work here. Jason Williams was never more thrilling than in a purple jersey. Kevin Martin ... are you kidding me? Francisco Garcia, Spencer Hawes, Jason Thompson and Donté Greene look to continue the legacy.

QD's the one recent failure. His physics might have made him the longest shot, despite holding the key Petrie elements (long, versatile, shoots like the KGB). We'll always wonder about Rajon Rondo, but whatever. I'll take this history in the draft rather than revision. But I think because of QD's loneliness in Petrie's hall of mistakes, it will always be a sad case for us. He isn't Olowakandi or Fuller, you know? There's no narrative, no laughing later. If it makes it some day, the Kings will not have been proven wrong ... Douby will just be considered a miracle.

And while I'd prefer Greene and Bobby Brown to get whatever exercise Douby was otherwise in line for, I hope I'm wrong here. I do hope something changes and QD is able to reach his truth this year in Sacramento. But you'd be blind to expect it these days.