The Stakes for Jason Levien

Share All sharing options for: The Stakes for Jason Levien 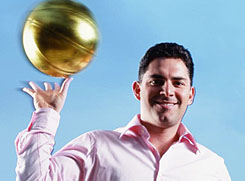 section214 passed on the news as soon as it hit the web, but the hire of Jason Levien as assistant GM is definitely something we'll be talking about a lot. This isn't a courtesy hire. Levien has made a pretty penny in the NBA as an agent. In the last two summers, he has signed Kevin Martin a $55 million deal and Luol Deng a $71 million deal. NBA agents make 4%. This is not small money. Once you work your ass off to get and keep some high-priced clients like Martin and Deng, being an NBA agent is a very lucrative endeavor.

Levien can't keep his clients. He has youngsters like Courtney Lee and Kyrylo Fesenko. I'm sure he'd be in a position to get a first-rounder or two this spring. He's giving up all that -- potentially millions of dollars -- for a job that pays a few hundred thousand dollars tops. This is a huge deal for Levien and his family. This is a huge deal for the Kings, who are making a statement with this move. (And yeah, as Kfan noted, this is a big deal for Martin, too, even if on appearances.)

Levien is not trifling around by taking this job (if it does come to pass -- everything seems a bit based on innuendo in Sam Amick's piece with neither side confirming). I can only assume Levien would feel he's in line for succession. Remember, Geoff Petrie turned down an invitation to discuss the open Atlanta job this past summer. That could have been because Petrie doesn't want to leave the West Coast, or because Atlanta's ownership is still a mess. Or it could be because he wants to finish his career here in Sacramento. Wayne Cooper, I assume, could have had a bigger better job at some point during the Kings' glory era -- how many of Bryan Colangelo's top deputies were whisked away or at least flirted with in Phoenix? Cooper is still here, and there's no indication he'd be seriously considered for the top job if Petrie were to retire. There's no indication that he wouldn't be, except that the Kings are hiring a second assistant GM who is 37, smart and seen to be out-of-the-box/cutting edge.

This is all to say it's reasonable to suspect that Levien expects at least a shot at the top job within a reasonable span of time. Is that three years? Is it 10? I don't know, and I suspect Levien nor Petrie do either. But considering the stakes involved, it simply has to be part of the equation.