Share All sharing options for: Losing to the Blazers By 17 is Not Really a Big Deal 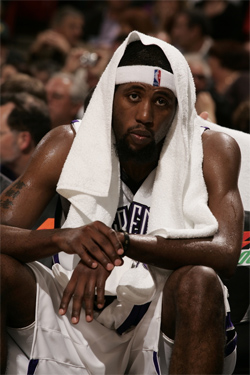 And here is why:

* Portland's offense succeeded on the basis of two central pillars: LaMarcus Aldridge is almost unstoppable without a lockdown post defender, and Steve Blake, Travis Outlaw and Rudy Fernandez shot lights out from deep. You can take LMA beating you if you're the Kings right now. The interior defense has improved with the addition of Jason Thompson and the maturation of Spencer Hawes. But Aldridge is a future All-Star. He scored 18 points on 17 shots. There's nothing you can do to make that worse. The Kings played him well. They also got out on shooters most of the time -- maybe 75% of the time. But Blake and Rudy and Trout Law hit shots. Can't do much against that, right? (The most egregiously bad closers on rotations, and it's not close: Brad Miller and Beno Udrih. You can almost see Brad say to himself, "I can't get out there, I'm just going to get in position for a rebound," and then think, "Crap I'd better at least try or Reggie is going to be mad," and then finally take a step toward the shooter, lean in and wave a hand. Blech.)

* The Kings offense was not so bad, despite poor shooting from Donté Greene, Beno Udrih, John Salmons and Bobby Jackson. I mean, with the team's two best shooters out, you need to not have all your guards other than Bobby Brown and Garbage Time Globetrotter Quincy Douby shoot terribly. Turnovers were not a problem, scoring the ball in the paint was not a problem. The Kings offense from Friday night would win plenty of games ... if the defense were any good.

* Bobby Jackson is still getting the biggest ovation at ARCO. Hawes and Thompson aren't far behind.

* The decision to play a snippet of "My Prerogative" after hot B. Brown plays is inspired and worthy of Nobel consideration.

* Jason Thompson is an absolute beast. Just wanted to be sure I got that point across.

* There appears to be a lack of photographic or video evidence, but Hawes blocked Oden's shot once. I can prove this! The Kings got three blocks -- two by Hawes, one by Douby. The Blazers who had one "block against": Oden, Fernandez, Rodriguez. I assure you that Douby did not block an Oden attempt. It was Hawes! And it was Hawesome. (The other Hawes block was on Rodriguez. Visceral and vicious.)