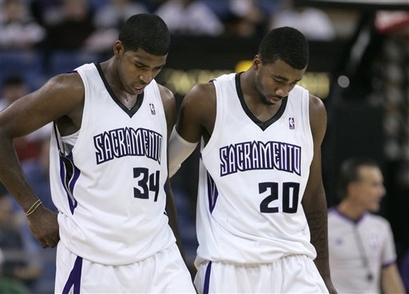 It seems like only yesterday we lauded Reggie Theus' frontline rotations. Last night against Dallas, Jason Thompson didn't enter the game until there were only 30 seconds left in the first quarter. He played about half the second quarter, earning two rebounds during his stint but doing little else. Still, he's been one of your brightest spots early this season. Per minute, Thompson and similarly snubbed Spencer Hawes (who also had six minutes in the first half) are the team's best big men scorers, far exceeding the potency of Brad Miller and Mikki Moore. Take a look.

Theus is allowing his starters to play themselves out of the game before giving Thompson any burn. Is Moore really doing something out there that makes it hard to take him off the court? He plays decent enough team defense, especially compared to Miller or Hawes. But this team ain't winning with defense right now. And this team certainly ain't winning without getting a few buckets. Something tells me Mikki Moore isn't going to help you get more buckets. Something like ... empirical proof.

Of course, Thompson and Hawes happen to also be the two best rebounders in the rotation. And the two best shotblockers. And they are efficient scorers. And they turn the ball over less than the starters at their positions. And they create shots at a higher clip.

Don't tell me it's the foul situation. If you're down by 19 entering the fourth quarter, does it really matter if Thompson picked up his third personal foul back in the second? This team is not good enough to mess with foul tactics. This team needs to be playing its best players. You can't tell me Moore is better than Thompson right now. Miller's offensive gifts from the high post may outweigh Hawes' presence, but Hawes is also 20 years old while Miller is 32.