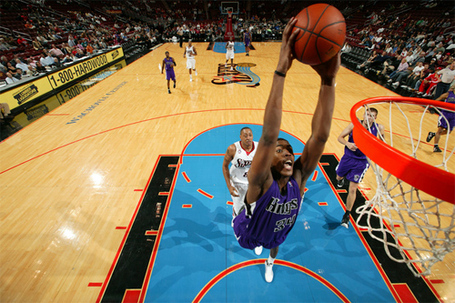 We shouldn't be surprised a roster of questionable depth and talent lost four road games. The lack of fire, focus and will has been a nightmare, though, with half the roster looking dead on their feet. The starting point guard is playing like he belongs in D-League, the starting power forward has a total of four rebounds through four games. The would-be All-Star guard isn't himself. Even the brash, cocky fill-in at center -- a cat who has never lacked a scowl or elbows -- played with no direction in a pretty damn important game.

Every game is important until the first win. Most of these dudes played like they didn't give a flying dove. Kevin Martin tried hard on defense in the second half, staying in his crouch and challenging Andre Iguodala repeatedly. Spencer Hawes showed he cared a little by asking Reggie Theus "Are you &#$%ing kidding me?" upon being yanked 90 seconds into the second half. Mikki Moore is taking responsibility for his troubles. Beno Udrih ... well, I don't know.

This blog will be dark today, barring major news. Feel free to comment at will, post FanShots and FanPosts. The front page won't be seeing any more action, as my attention is just a bit diverted. I'll be back on Wednesday morning to light Beno's eyebrows on fire or photoshop Shock's face onto a Zeus tapestry.

Just keep the faith a little longer. Things will be better tomorrow.