Share All sharing options for: One More Time: EDDIE JORDAN 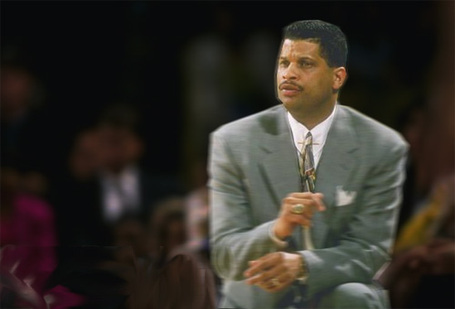 rbiegler lobbed the ball at the rim flawlessly, section214 slammed it home. I guess I'm here for garbage time.

Digging through the SI Vault, I popped in on this 2003 feature on the Princeton. The whole thing is worth a re-read. But this passage completely sums my intentions with the obsessive Eddie Jordan advocacy to come:

No "pod" of the Princeton offense has been more fascinating to follow than the one Carril has established in the NBA in his quest to bring his five-man passing game to a league dominated by me-first 'tudes, isolation plays and pick-and-rolls. For years, though, Carril had maintained that his creation would in fact work beautifully, given the speed and athleticism of NBA players. " Michael Jordan would be one of the great beneficiaries of this," Carril says, "because he's totally fundamentally sound."

In the end it took four sales over a five-year period to seal the deal. First, Carril convinced Eddie Jordan, then a fellow Kings assistant, over a season's worth of breakfasts, lunches and late-night bus rides. Jordan was elevated to head coach, and though the Kings dumped him in 1998 after one full season—injuries had doomed his version of Princeton, proving a Van Breda Kolff adage ("It's not what you do, it's who's doing it")—Jordan still believed in the system when he joined the Nets as an assistant in '99. Two years later, he persuaded head coach Byron Scott to let the Nets run part of Carril's scheme in the NBA summer league. They finished 6-1. Intrigued, Scott timed the offense against the shot clock during the coaches' pickup games, and it came in under 24 seconds. He decided to take the leap.

The Nets went to the Finals the next two seasons. Then E.J. turned Washington into one of the best offenses in the world.

I don't mean to assert hiring Jordan sets this team on a path toward immediate glory. But Petrie is about to make his move. We need a proper shepherd. A better one than Jordan, given all circumstances, does not exist.