Worse Than It Looks

Share All sharing options for: Worse Than It Looks

I'm a big believer in points margin as a team-level indicator because, well, it works. Wins and losses obviously tell you a lot the quality of teams. But you can trick the W-L ledger -- with some lucky close wins, a mediocre team can look decent; with some unlucky bad losses, a good team can look average. Using margin, we pump the differentiation. And as I said, it's a great indicator. Boston blew everyone out of the water with its 2007-08 points margin.

It's not a hard concept, either: It's your points minus your opponent's points. (Understand why is an effective tool yet?) If we were to take the Kings points margin after 20 games and compare it other Kings teams of the past 15 years, we'd find it's the second worst mark behind 1996-97. The Kings have been outscored by 147 points this year, which means the average Kings performance to date has been a 7.35-point loss. (Only two teams are worse this year: OKC at -10.95 and LAC at -8.17.)

But this gross glimpse is just, well, gross. I think visually, so I compared the rolling points margin for each of the past 15 Kings teams to see how bad this is going to get. 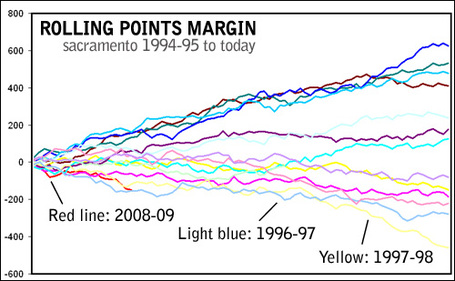 If you'll remember, Jordan's season got out of hand quickly in the second half (verified by the chart). It was bad all year -- offensively bad. But it was a complete, complete disaster the last few months. Really inconceivably terrible. That summer, Jordan got the quick ax. And the team began its upward swing.

Is this team that bad? Mitch Richmond, Corliss Williamson, Anthony Johnson and Yogi Stewart, with some Olden Polynice, Terry Dehere and Lawrence Funderburke thrown in. Heck, a 33-year-old Otis Thorpe started 20 games for that team! I get sick thinking about watching that squad on KMAX-31. I had mono the last month of the season. I had nothing to do but watch that team. I hated it.

Obviously, I don't feel that way today, not with Kevin Martin, Spencer Hawes, Jason Thompson and Donté Greene hitting the court. The team looks to be every bit as bad -- possibly worse, as this version is on track for 20 wins; the '97-98 squad won 27. But that'd involve things remaining this bleak all season. That'd involve the team giving up.