Share All sharing options for: Donté Takes Réno, Part I 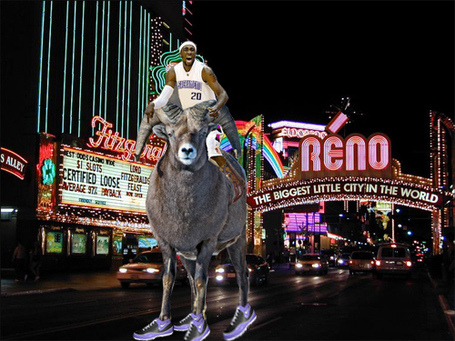 Donté Greene will make his Réno Bighorns debut tonight against the Bakersfield Jam. The tip is at 7PM PST. No word on whether D.G. will start, but he's expected to get heavy minutes while in the D-League. His notable teammates include former Orangeman Gerry McNamara and former King Patrick Ewing Jr. The Jam have Derrick Byars and Trey Johnson. Mateen Cleaves, the finest towel-waver in Sacramento history, is on the Jam roster but hasn't played in a while, and honestly I'm not actually sure he'll still with Bakersfield.

We'll all be refreshing the boxscore, no doubt. Any comments on the game or Greene's budding skills as T.V. host ... leave them here.