So many plays will get lost in a triple overtime thriller. I mean, 225 field goal attempts, 77 free throws, 125 rebounds ... 268 points -- there's just too much to compress. Given the unbelievable pressure of any overtime period, a monster like this is basically two games worth of stress and butterflies. 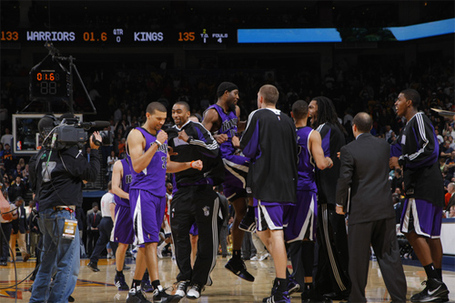 Kevin Martin's dunk, Beno Udrih's out-of-your-trousers deke, Francisco Garcia's galloping horse, John Salmons' killer rebound and winner -- all extremely worthy of memory, vital plays (just as the negative counterparts -- Martin's carry, Brad Miller's tech, Brad Miller's foul on Kelenna Azubuike on the missed free throw Miller didn't rebound -- are). But the play that sticks out to me -- more because of it's wider implactions -- is Garcia's block near the end of regulation.

The block led to a 24-second violation, a vital defensive stand. On replay, they showed a slow-mo close-up of Garcia's reaction once the shot clock went off.

I sat positive he was dropping the "Eff Yeah!" or "Eff you!" But he brought a parable, a real lesson to this season. Forget It.

All the bad from this game -- iffy defense against on awful-shooting team, the absolutely inexplicable technicals by Bobby Jackson and Miller, the questionable possessions in potentially fatal positions, the extremely tight (to the point of choking) rotation, the miscommunication on defense, the bad turnovers, the missed bunnies -- FORGET IT.

This team will not be the Kings next season, or in 2010-11, or in 2011-12. Several pieces will remain, and we'll be here. But really, little that happens right now has a real, tangible effect on tomorrow. I mean, in the morning we're discussing Martin's leadership ... and he records the vital points in regulation and in the first two overtimes. We talk about Miller's energy, about Natt's faith in Beno -- Miller goes animal-style and Beno plays 56 minutes. The situation is so remarkably fluid. Up today is down tomorrow, what's black turns white on a dime.

There's no use stabbing ourselves and others over the failures of this Kings team. We're on pace for 20 wins, for God's sake. The plight of the franchise won't be solved in a day, whether the guards get out on shooters or whether we get a key rebound. Nothing's going to fix this team right now, so why kill ourselves in worry? Why should a bad team that's supposed to be bad worth all the stress?

Bad things happen? Forget It. This game would still have been entertaining if Azubuike hit the winner. I enjoyed the first 62 minutes regardless. Now let's try to enjoy the next 42 games. Carpe diem, or whatever.