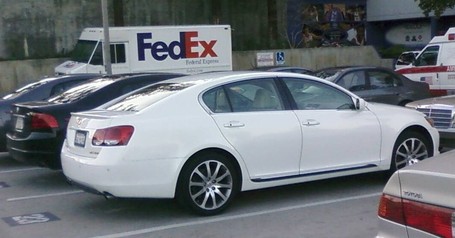 The Peaches Mobile - It gets 1 tool per gallon.

The bulk of this is going to revolve around pregame. My daughter is performing at halftime tonight with her cheer squad, so Mrs. Section214 and I had to get her down to ARCO by 4 PM.  After delivering her to the security entrance, we were told to wait outside with the other cheer moms and cheer dads. This afforded me the opportunity of skulking and stalking the area for the next hour. Mrs. Section214 was very excited, and felt like a cub reporter on assignment with me. I quickly attempted to dispatch her for coffee and doughnuts. She quickly dispatched a backhand upside my head.

I dropped the Sunday tickets off at will call for vfettke. The lady behind the glass gave me a very odd look. By the way vfettke, she marked the envelope 6 PM instead of Noon. I don’t think that will be a big deal, but just in case they have any trouble finding them…

Peaches Napear rolls into the lot a little before 4:30. I’m ready to scream “Hey Peaches!” at him but he has his kids with him and I just can’t bring myself to be that much of an arse. As I hang my head in shame, Mrs. Section214 notes that Napes is staring at another car in the lot. I look up and sure enough, Grant is giving a Honda Accord the “Judge Smales” look. He then gathers up his boys and scurries inside.

Bobby Brown is dropped off by his entourage in a brand new jet black Porsche Cayenne. He has his “Hello Kitty” backpack in tow. This is so many kinds of funny to me I just stand there sputtering and giggling.

‘Reef walks over from the practice facility, suit draped over his shoulders. Sigh.

A guy comes out, gets into the Accord and moves it into another spot. I ask the guy “Did Grant make you move that?” The guy gives me a sheepish grin and nods his head yes.

JT arrives and by all appearances the ‘sclade has been purged of all whip. His “Hello Kitty” back pack looks like a coin purse in his hands.

Fat Lever looks smooooooth. Jason Hamm, not so much.

Donté comes walking across from the practice facility, also with a “Hello Kitty” bag. I give a weak nod and wave, and he says “Héy” with a nice smile. A thinking man would have snapped a quick photo. Instead, you get Peaches’ Lexus.

K9(woof!) walks across the lot. I try to calculate how much money he is making while walking from ARCO to the practice facility, but it makes my head hurt so I stop.

Peaches comes out and moves his car one spot over to the area vacated by the Accord. I am screaming "Peaches, you tool!" over and over at the top of my lungs, but he apparently can't hear me through the thick leather Ed Hardee handbag that my wife has thrown over my head (I could tell that it was an Ed Hardee handbag from the label inside).

OK, quick and random thoughts and observations from the game –

Five year old Michael Monterrey brings the house down with his rendition of the National Anthem.

Do you think Big Mike is sitting at home watching the games, and thinking to himself “The attendance has really suffered since they let me go.”

I am for some reason reminded that I once visited an herbalist that advised me to put Thabo on my Sefalosha.

I believe that by the end of this night the Brad Miller to Chicago rumors will be officially dead.

Joakim Noah’s free throw stroke is so ugly he should be a Sacramento King.

0 bench points at the half.

With 3:30 left in the 3rd quarter and after back to back Noah dunks put the Kings down by 18, the boos start in earnest.

6 assists against 19 turnovers at the end of the 3rd quarter. Sweet Jesus!

JT comes out with 2 minutes left, and the remaining crowd gives him a very nice round of applause.

A 21 point loss at home to the 10th best team in the east. Just brutal.

I can’t wait for next Friday. The place should be full and I’m going to give C-Webb the 3 months worth of cheering that has been welling up in me since the beginning of the season. I don’t care if the Maloof’s make extra coin that night. I don’t care if there are some that think that this honor is not deserved. I’m going to go and get my Kings’ rocks off and feel really, really good about being inside ARCO Arena, if only for the few moments that this team is not playing.

And 1 – Right now, this team is worth watching for Kevin Martin and Jason Thompson and not much else. I sure hope Spencer gets his groove back (attn: TZ – photoshop op.), and I sure wouldn’t mind seeing a little more of buckéts down the stretch.