Share All sharing options for: No Pygmy Goats Harmed As Lakers Beat Kings 98-92 in Vegas

I won't lie: this preseason has been rough.

With no visual evidence to help mold the game experience, my information soaking is so ... weird. I'm not the type to watch a choppy illicit feed, so I didn't see a second of the game. Didn't see Spencer Hawes's blown oop. Or Andrew Bynum beasting it up. Or how Desmond Mason looked.

So I rely those who were there for that. I read Sam Amick or Jason Jones's gamer first thing. Then to the Associated Press. Then the opponent's hometown paper. Then the box score, the play-by-play, the shot chart ... and I'm ready to go.

And I honestly feel like I'm still talking out of my ear. Which is why this preseason I'm focusing more on observations than conclusions. 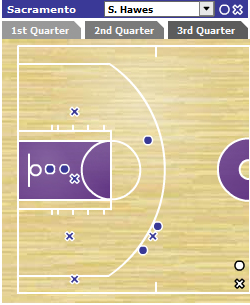 Observation #4. Source: shot chart. Data: Tyreke Evans took 18 FGAs and two FTAs. Ten of 18 FGAs were two-point jumpers. Evans hit 3-10, for six points on 10 shots, or a 0.60 pts/poss rate. He took one 3PA, and missed it, for zero points on one shot. He took seven close FGAs, hitting three and drawing a foul (1-2 FTA), for seven points on eight possessions, or a 0.875 pts/poss rate. Observation: Tyreke Evans was more effective scoring at the rim than anywhere else. Also, Tyreke Evans takes a lot of long jumpers.

Observation #6. Source: box score. Data: Desmond Mason was 1-5 for two points in 17 minutes. He added four assists and three rebounds. Observation: not the best night for the Mason bandwagon.