Share All sharing options for: Transportation Available - Inquire Within 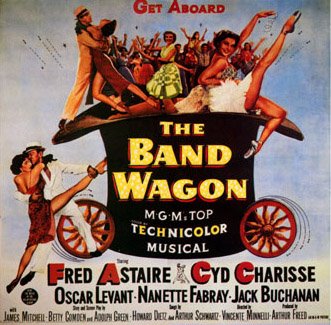 Cyd Charrise had long legs. Fred Astaire went on to sell vacuum cleaners after he passed away.

The nice thing about bandwagons is that they are open air. They are amazingly easy to jump on and off of, and a bandwagon pass is transferable – you can jump from bandwagon to bandwagon at your leisure. I just took inventory at the StR garage, and I am pleased to update you on the availability, access and run times for the Sacramento Kings fleet of old and new bandwagons.

Your 2009-10 Sacramento Kings Bandwagon  There is still room available. Warning: Those with high blood pressure may not want to board this bus. Despite the installation of a new Shock system last year, the ride is still quite bumpy. The odometer has seen multiple turnovers. But if you love adventure, you will likely enjoy the tour.

The Playoff Bandwagon  Currently up on blocks and not available for boarding.

The Geoff Petrie Bandwagon  Full disclosure: I drive this wagon. There are some loyal riders that will probably never get off of this ride, while some of the folks towards the rear of the wagon jumped off over the past couple of years. GP has changed out some of the older parts in an attempt to smooth out the ride, and has added to the navigation system in an attempt to get the vehicle pointed back in the right direction. Seating is available, but the long-time riders will require that you wear a "Hello Kitty" backpack.

The Paul Westphal Bandwagon  It has taken awhile to get the Muss musk out of this rig, and there was rampant Reggie rot. Not only that, somebody really Natted with the brakes, completely eliminating the ability to make a defensive stop. Riders have now just begun to get back on this wagon, and they continue to board with cautious optimism.

The Kevin Martin Bandwagon  This one has been on and off the rack over the past couple of years due to a burned clutch. There are some that would prefer to trade this rig in for a different model, but she still corners like a dream and is effective off the line. The seats are full in the front, the result of some ardent riders that have never vacated the wagon. But there is still room in the middle and rear of the cabin. This is the most efficient model of the bunch, when it is running.

The Tyreke Evans Bandwagon  This one is almost full, even though some classify it as a wagon, while others see it as a bus, a van, a cargo ship, a plane, a train, or a space ship. Though difficult to categorize, this vessel may provide the best ride for the next several years. On a related note, the Ricky Rubio Bandwagon is now almost completely empty. Many riders left in such a hurry they left their passports behind.

The Jason Thompson Bandwagon  This utility wagon has the biggest motor in the fleet. The emission system can be overly foul at times, which can lead to excessive parking. But this wagon finishes relatively well, and it sports the cleanest glass in the fleet.

The Spencer Hawes Bandwagon  We’re currently replacing the flooring on this coach, as it has been worn through by so many people entering and exiting the vehicle. The wagon may be haunted, as sometimes it is parked inside but still winds up outside. We’re having a little trouble with the motor, as it seems to whine a little when running (we attribute this to the Brad Miller 5w-30 that was put into this rig last year). Some new seats have just opened up, though they are bench seats. We are still hoping that this wagon, one of the younger ones in the fleet, will mature into a reliable ride.

The Desmond Mason Bandwagon  A good wagon for defensive driving, but it has no real range. This wagon does all the little things, and it is economical. But there are sexier wagons in the fleet. For example –

The Omri Casspi Bandwagon  This import is the only wagon in the fleet that is Kosher for Passover. This baby does it all. And while we’re still working the bugs out of it (and the manufacturer recommends a conservative approach during the break-in period), the line is forming quickly to get on this wagon.

The Francisco Garcia Bandwagon  Also currently in the shop, though it should be back in service well before the Playoff Bandwagon.

The Andres Nocioni Bandwagon  This crossover wagon has no seat belts, no restraint system, and no airbags. Riders on this wagon are going to get bruised. And it is one of the more expensive vehicles in the fleet. But this wagon always answers the call, and it is ready for any terrain. At some point it may be priced to move.

The Sean May Bandwagon  This one was acquired after spending most of the past few years in a garage in Carolina. It was shipped out here, and it finally arrived after passing through several weigh stations. It is easy access as it is built a little lower to the ground than some models, but it appears that it will get some legitimate burn in the fleet. This is the only bandwagon that has a separate dining car.

The Jon Brockman Bandwagon  The riders on this wagon would like to see it get out of the garage a little more often. This is the wagon that you want when you’re caught in traffic. Be advised: this vehicle makes wide turns.

The Donté Greene Bandwagon  No one is still quite sure where to park this one in the garage, as it has not quite yet fit in spot #2, 3 or 4. This is the only wagon that comes equipped with live entertainment.

The Sergio Rodriguez Bandwagon  This sporty little import has turned a lot of heads, but most people have been slow to jump on this bus with both feet. Some of this is due to this wagon being parked behind another wagon in the fleet –

The Beno Udrih Bandwagon This one has provided a sometimes jerky ride. The biggest problem seems to be that we can’t get it to run consistently. And if it starts cold, it never warms up. This wagon has gotten progressively emptier over the past couple of years, though it has not reached the proportions of the Warriors’ Stepehen Jackson Bandwagon, which has been evacuated and roped off until a hazmat team can arrive.

The Kenny Thomas Bandwagon  Currently closed and being fumigated for fleas.

The Gary Gerould Bandwagon  Smoothest ride in the fleet. The Grant Napear Bandwagon was set on fire and burned to the ground. All that remains is a peach air freshener and the remnants of a "Diamond & Gold Vault" ad that was on the back of the wagon. The Kayte Christensen Bandwagon is the only double-decker wagon in the fleet, and it is currently standing room only. The Jerry Reynolds Bandwagon is actually a hay ride, but Jerry personally greets every rider with a hearty "Welcome to the Tasmanian Waganian!"