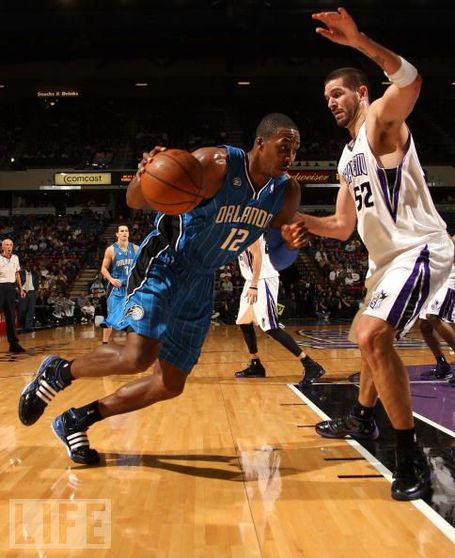 Nenad Krstic (left) drives on Spencer Hawes (right) during the Thunder's 102-89 victory. Krstic had 71 points, 43 rebounds, 7 blocked shots, and personally took the entrie crowd out and bought them Chalupas after the game.

Proving once and for all that Sactown Royalty is indeed a democracy, this morning you get to create your own game recap. Just choose one of the handy options provided, and feel as good or as bad as you want about last night's game. Pencils ready? And go...

I can’t lie. Last night’s 102-89 loss to the Thunder made me very (mad/excited/sleepy). I know that the Kings are a work in progress(?), but I had no idea that they would be so (infuriating/fun to watch /alcohol inducing). Let’s face it. There are games that you (expect/hope/never dream) you’ll win, and this was one of them. 81 more of these and I’ll be ready for (post season/the draft/therapy).

Kevin Martin was (incredible/a ball hog/not injured) in the 1st half, accounting for over 50% of the Kings offense when you include his points and assists. His true shooting percentage of 71% was (insane/overrated/too complicated for me to understand). Martin tailed off in the 2nd half, however, and by the end of the game he needed (help from his teammates/rest/to be traded).

Up front, the Kings were just (young/thin/horrible). Nenad Krstic and Jeff Green looked like (all stars/lucky bastards/all stars) against the Kings front line. Jason Thompson couldn’t stop (fouling/anyone/everyone by himself), Sean May provided (no rebounds/a grim reminder of our current situation up front/hope for the future), while Spencer Hawes brought (passion/punch lines/height) from off the bench. Jon Brockman also got in a few minutes. What Brockman lacks in (height/minutes/talent), he more than makes up for with (heart/hustle/the company he keeps). One thing was proven: all of this talk about getting another big man is (justified/crazy talk/making my head hurt real bad, Wendy).

Tyreke Evans is (so young/so talented/so confused) right now. He had an off night, missing 11 of 16 shots and turning the ball over 3 times while delivering 2 assists. He missed (a few/several/an unholy number of) shots at the rim, but that can be attributed to (rookie jitters/the Thunder defense/Beno Udrih’s Tyreke Evans voodoo doll). I’m sure that within a couple of weeks, Evans will have us (up and cheering him/calling for Geoff Petrie’s resignation/concocting trades for the rights to Ricky Rubio).

Omri Casspi was a (bright point/surprise/one-man sleep deprivation tank for Israel). His 15 points on 9 shots in 19 minutes proved that he is (ready to start/an NBA player/a chucker). Too bad he’s (stuck behind Desmond Mason/so young/Jewish), because I would like to see him play (more/less/somewhere else).

I sure liked that the team (played hard/ran up and down the court in the right direction/didn’t get hurt). This makes me feel (good/bad/postal) when I think about the rest of this (short/long/loooooooooong) season.

And does anyone know when Ziller is coming back? No offense, but I find section214’s posts to be (a breath of fresh air/tripe/perfect for the bottom of my bird cage). Compared to him, I’m (Sam Amick/Exhibit G/Ailene Voisin). Tom, if you’re out there and reading this, please (hurry back/stay away/provide me with section’s home address).