Share All sharing options for: The View From Section 214, Special Section 104 Practice Edition 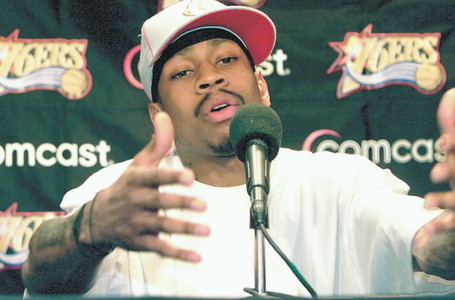 You had me at "free parking"…

It’s Mrs. Section214 and me for the open practice session. Mrs. section has been battling a head cold, so we’ll see how long she is able to hang in there. The chicken strip basket is presently keeping her occupied.

Sitting in section 104 tonight. Not to be an upper deck snob, but I think I prefer my seats. You’re certainly closer down here, but the sight lines are so clean from my usual perch.

The evening starts with a little season ticket holder Q & A with Gavin Maloof and Paul Westphal. The more Westphal talks the more I like him. He is definitely comfortable in his own skin.

I think that there are a little over 1,000 people this evening.

The setup for the evening is for the Kings to be split into two squads.  After 15 minutes of warming up, they will play as many as 8 games; first team to 15 wins each game.

The white team is Evans, Thompson, May, Garcia, Nocioni, Udrih, Mason. Hawes is present but not suited up.

Based on the warm-up drills, the following is apparent: Rodriguez can pass, Casspi can jump, Garcia can swagger, and Donté Greene has grown real arms.

Donté and Desmond get into a little one-upmanship on the dunkage. Whatever was broken on Mason appears to be fixed – dude can get up.

Martin starts the first game with a bucket, followed by a block on Sean May, followed by a hoop with harm. He touches the ball the next time down, and Mrs. section blurts "Don’t hog it!"

Mason closes the first game for the white team with a 3. Evans had 6 points.

Somebody gave Andres a bloody Noc.

Rodriguez supplies the ally and Casspi supplies the oop. Rodriguez later closes game 2 with a steal and a bucket, but the game belonged to Brockman.

Greene is working very hard on defense, especially when he draws Garcia.

Udrih ends game 3, and I’m beginning to believe that there must be two Jon Brockmans – he’s everywhere!

Evans has had some very nice feeds off penetration.

Laugh of the night goes to Scott Moak. After Brockman hip checks Desmond Mason into the 2nd deck (followed by the classic "Who, me?" look), Moak announces "Jon Brockman called with the ‘touch’ foul on Desmond Mason."

Udrih finds Mason on back to back ally-oops, and then hits the winner in his best game.

All told, the team scrimmaged for almost two hours, and Mrs. section214 made it the entire way (what-a-trooper).

·         Kevin Martin a special kind of offensive player. Everyone else on this team (at this point) is not.

·         Jon Brockman is a ball hound. And he is a better shooter than advertised. But mostly, he is one of those guys that will always be around the ball.

·         Udrih and Rodriguez both represented themselves well enough, but I didn’t see enough from either one of them to convince me that this team couldn’t go with Tyreke Evans at the point. And with the high pick and roll that they were running, Evans could flourish.

·         Jason Thompson will quietly amass double-double after double-double this year. The best and worst thing about JT is that he lets the game come to him.

·         Desmond Mason will contribute for someone this year.

·         If Lanny Smith makes this team, it will be because Beno Udrih and Sergio Rodriguez were deported.

·         Sean May appeared fit, but his conditioning is still a tad behind the other bigs.

·         Rodriguez’ shot looked very flat early, but it got better as the evening progressed.

·         Hard to tell, but my hope is that the errant shooting that was present during most of the evening was a result of improved defense(?).

Well, that’s it for now. My gut tells me that this team will exasperate us, as young teams often do. But I like the feel of this squad. I remember being similarly excited when the Kings drafted Lionel Simmons, Travis Mays, Duane Causwell and Anthony Bonner in the same year. I hope this turns out better.