Share All sharing options for: Game Preview: Kings At Spurs 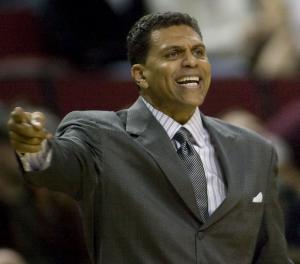 The Kings wrap up their season opening three game road trip at San Antonio this evening, with a 5:30 (PDT) tipoff against the San Antonio Spurs.

Those are some damn big trick-or-treaters: McDyess and Theo Ratliff are dressing up as Spurs this year, hoping that someone will drop a championship ring in their bag at the end of the season.

Most likely to egg your house: Duncan is the obvious choice here. Expect him to be flirting with a double-double by halftime. But also keep an eye on Roger Mason and/or George Hill off the bench. If the one of these guys winds up matching up against Beno or Sergio, they could wind up with a lot of open three point looks while our guys are elsewhere "helping" on defense.

Fad that we would like to see become fashion: Tony Parker had a rough time with bigger guard and former Memphis Tiger Derrick Rose during a 92-85 loss two nights ago. Next up: Tyreke Evans.

Geoff Petrie matchup of the night: Blair vs. Brockman and Sergio Rodriguez. As noted, Blair would have been available to the Kings had they not swapped picks with the Blazers, picking up Sergio and cash in the exchange.

Last but not least, a little housekeeping. I am putting a timed game  thread up for 7 PM (PDT) for 2nd half use, as I am anticipating an automatic thread from TZ at 5:30 PM. Should this not occur, use this post as the 1st half thread. I apologize for the confusion, but not everything that TZ has programmed is visible to me. Also, for those of you on daylight savings time, remember to turn those clocks back an hour before your head hits the pillow, and savor the extra sleep.