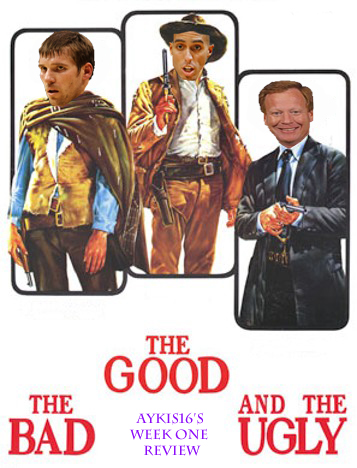 This is something I would like to start doing every week, depending on the response I get, a segment I'm going to call the Good, the Bad, and the Ugly (there's a bad category and an even worse category. This is the Kings we're talking about). It's basically just going to be a weekly recap with some thoughts on next week from Nostradumbass.

I know a lot of us had hoped that we would take at least one of the games on the opening trip, but to be honest I don't think any of us should be surprised at our 0-3 start. We played three very good teams, one being a championship contender, another featuring the best point guard in the league, and one with some of the league's most promising young talent.

So let's take a look at this road trip

1. Tyreke Evans played against 3 of the best point guards in the league.

I don't think this can be understated. This was not a nice and easy way for Reke to start the season. By my count, he's already played the 4 best point guards in the league (Deron Williams and Steve Nash in Pre-season). It's a lesson for him. I think I would rather have him learn from playing against these guys early, than by starting out by playing weaker opponents.

2. We outrebounded the Hornets and Spurs.

That's not a bad statistic at all.

3. We only lost to the Hornets by 5 with Kevin Martin shooting NINE of TWENTY NINE and ZERO Free throws.

When are we ever going to be able to say that again? 9-29 for K-Mart is among his worst shooting performances ever. And 0 free throws? Makes me want to read Tim Donaghy's book a little.

4. Omri Casspi is ready to be an impact player this year.

If that's not good news I don't know what is. He might not be ready to be a starter, but he'll probably be our best scorer off the bench this year with Cisco out.

Through 3 games, he's averaging 8.7 points, 9.3 boards, 4.0 assists and 1.5 blocks. I expect the points to be around 11 or 12 this season (he doesn't look for his shot at all), the boards might go above ten, but the assists are a really nice number to see. Also, 1 turnover in all three games. Not bad at all. I think JT is actually suffering a little bit from not having Spencer start with him, mainly because the chemistry between the two is really good. I think both of them would see a boost in productivity with Spencer starting.

6. Jon Brockman is exactly what we expected

Rebounds and hustle. Now if only he could make his free throws.

It feels strange to me that my biggest complaint with Kevin is his shooting. But he's also been good at handling the ball, something we got on him for last year. Only 4 turnovers through 3 games. Lets hope that keeps up (and his shooting doesn't)

You really can't complain too much about how Mason has been playing. His defense has been good, and he dominated David West the other night.

Really great stuff both recapping and previewing the games in Ziller's absence. Bravo.

The only reason this isn't going into the Ugly is because he got back on track against the Spurs. Over the last two years, the most Kevin has shot in a game is 24 times, 3 times. He scored 45, 37, and 29 in those games. It's likely that the New Orleans game will go down as the worst shooting performance in Kevin's career.

Besides his 22 and 10 performance against San Antonio (which came mostly in garbage time), Spencer has not played well off the bench. His passing and turnovers have been especially lacking. I still think he should start, mainly because of the chemistry between him and JT. I think Westphal has been punishing him a little for his offseason antics, and as long as he repeats performances like the San Antonio game, he'll be back in the Starting lineup soon.

3. The Sean May Starter experiment

I'm just not digging it. May just hasn't really been effective. He's also not grabbing that many boards. His FG% is very good though. I just think that he would work better as our first big off the bench.

4. Tyreke Evan's off the ball defense

Tyreke plays on-ball defense very well. People have a tough time getting past him. But his enemy is the pick and roll. He just does not react to screens well, and it leads to a lot of easy hoops for the other team. Hopefully Westphal noticed this (as I'm sure he has) and that will be the focus for him this week.

I don't think Sergio or Beno have won the backup point guard role yet. Both have been pretty bad. My vote goes to Beno simply because we've really been lacking shooting as of late.

Our offense has been pretty bad. Our shooting is definitely not up to par, and I don't know why this is. Perhaps its because the coaching staff has been so focused on defense and rebounding this offseason that the offense has suffered, but I won't start to worry unless our shooting is again horrible next week.

DAMN YOU RALEY'S! Unfortunately this trend will continue until the Atlanta game where Aykis16 makes his 2009-10 StR game thread debut.

1. The 1st quarter of the OKC game

To put it simply, the Thunder came out and dominated us in that first quarter. Not a good start for the season.

Right now as Ziller pointed, we're the worst defense in the league. It's sort of surprising to me after having seen us improve a bit in preseason, but this is why preseason doesn't count. This better improve or we're in some serious trouble.

3. The huge overreaction on StR after the OKC game.

Unless we get blown out by 30 or more against a team we should beat (For the record, we were the worst team last year, there are no teams we should be able to confidently say we should beat) I don't think any of us should take one game so seriously.

We are going to miss Cisco's scoring off the bench A LOT.

And now Nostradumbass's predictions for next week: