Share All sharing options for: Preview: Rockets at Kings 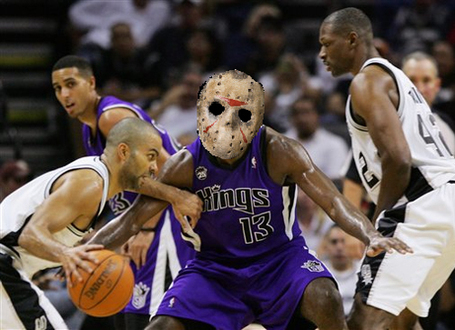 "Doomed! You're all doomed!"

Houston is 5-3, with road wins at Golden State and Utah. The road losses were at Portland, and Tuesday in Dallas. The other three wins for Houston, all at home, were against the Blazers, Thunder and Grizzlies. That makes the troubled Jazz the team's best road victory, and the Blazers the only impressive home win. So two impressive wins. Not so frightful, right?

Missing Yao Ming and Tracy McGrady, the Rockets have put together the league's 11th ranked offense and 13th ranked defense. The strength of the offense has been in shooting (6th in the league with an effective field goal percentage of .518) and in offensive rebounding (9th). The team doesn't draw many fouls (23rd) and coughs up a bit too many turnovers (20th). The only weakness on defense for the Rockets is rebounding -- as the Kings (or Jason Thompson, rather) continue to impress on the offensive glass, this should be a key item to watch. Luis Scola is by far the team's best defensive rebounder. If Thompson can beat Scola to the ball, the Kings could have some opportunities for easy buckets against Houston, which is something that will rarely otherwise happen.

Scola, Trevor Ariza, Carl Landry and Aaron Brooks have been the primary scorers for the team. It'll be interesting to see how the Kings line up in the frontcourt against the Scola/Chuck Hayes line -- Paul Westphal might be forced to turn to smallball featuring Andres Nocioni at the power forward early on. In the backcourt, I imagine it will be Brooks/Beno Udrih and Ariza or Battier/Tyreke Evans. Either way, Beno should have a size advantage and Evans could be in for a long night on offense.

Jason Thompson vs. Luis Scola. Again, Scola is a monster defensive rebounder, and Thompson (as you know) is a killer on the offensive glass. Thompson was reportedly ill Thursday; hopefully he's in top shape today so he can battle with Scola and Landry down low. On the other end, Thompson will have to respect Scola's outside jumper. The Kings' best bet for help is off of Hayes, who is a major minus on offense, but as Scola isn't really the best cutter/diver, we might see JT ease off of him on Brooks penetration.

If Battier guards Nocioni, who isn't really the caliber of scorer Shane is used to defending, with Battier get bored and starting knitting or something? Great scorers have trouble getting motivated for non-marquee games, right? Well, shouldn't elite defenders snooze on unexciting one-on-one matchups?

If the Kings lose this game, it will start a four-game losing streak. The Kings will not reach .500 again for the rest of the season, barring a Chicago win next week as a temporary respite. If the Kings win, they will stick around .500 until just before Christmas.

The game is tipping just over 7PM on CSN and KHTK. Game thread at 7, postgame thread at 9:45, recap on Elm Street.