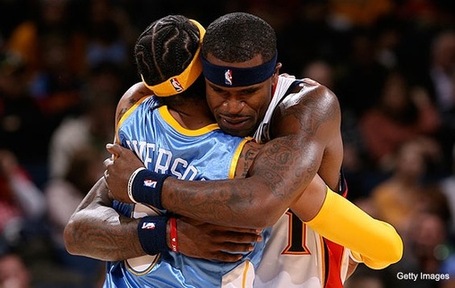 Both of these guys have played at ARCO Arena this year, but not for us. This is a good thing.

Twelve games represents 15% of the NBA season. In baseball terms, it would be about the equivalent of the month of April. And while there is a long way to go in the season, you can begin to draw some basic conclusions and comparisons as it pertains to the Sacramento Kings and the players that make up the current roster. This is not to say that this conversation could not take a completely different turn in 30, 60 or 90 days. But to this point in the season, here are my musings (and please remember to take into consideration how much you paid to log on here when you assess a true value to the following comments).

Kevin Martin – The goods: 31 pts., 3 assists(!), 5 boards(!!) and 2 steals(!!!) per game. True shooting had dropped below 57%, which is still very good. These numbers are all-star numbers. Martin was on his way to becoming the more complete player that we were begging for him to become.

The not-so-goods: Martin is hurt…again. And once we worked through the verbiage and concluded that Martin is not soft but has been injury prone, we were left to ponder whether Kevin Martin can stay healthy enough to be a consistent contributor to this Kings team. Certainly, Martin cannot afford to suffer another substantial for the duration of his current contract. Back in March of 2008, I wrote a post explaining that I did not want to invest in Ron Artest based solely on the number of games that he had missed. Ron-Ron had missed 19-27% of the games that he could have played in since he became a starter in the league (depending on whether or not you wanted to count his Detroit brawl suspension). As of today, Martin has missed 26% of the games that he could have played in since becoming a starter, and that number will grow over the next couple of months. Martin has got to figure out how to shake the injury bug, or he will become the modern day Rex Chapman – a player known for what could have been.

Tyreke Evans – The goods: Clearly one of the top two rookies in the league to this point (along with Brandon Jennings). 18 pts., 5 boards and assists and a couple of steals per game. Barely 51% true shooting, but that is not bad for a rookie, especially one that started the season below 50% at the free throw line (now up to 75%). And he has been (according to Paul Westphal) the team’s best defensive player. I’m not saying that Tyreke will become our Brandon Roy, but I am saying that the possibility of that happening at least exists.

The not-so-goods: I got nothing. There are certainly areas where Evans can improve, but to this point he has been so far beyond our early season hopes for him, any criticism would really be nitpicking. Let’s re-visit this in about a month or so.

Jason Thompson – The goods: Compared to last year, JT is +3 pts., +2 boards, +1 block and +1 assist in +7 minutes. Free throw percentage up 11%. Thompson has improved his perimeter jumper, and is developing a left hand(!).

The not-so-goods: Last year, Thompson averaged a foul every 7 minutes. This year he is averaging a foul every 8 minutes, which is not much of an improvement. And while I will agree that some of the fouls on Thompson are of the cheap variety, the majority of these fouls are a result of JT using his hands on defense instead of his feet. Once Thompson masters the art of defending with his feet, the foul trouble should abate. Thompson also needs to improve on recognizing and reacting to double teams now that opposing teams are paying more attention to him.

The not-so-goods: He is exactly the same as last year’s Spencer Hawes. Hawes shows flashes of who he could become, but he also has long rough patches. This might not be as big of a deal on some other teams, but when your production alternatives are Kenny Thomas, Jon Brockman and Sean May, the shortcomings are greatly accentuated. Hawes does not need to become great over the next couple of months, but he does need to become a consistent contributor.

Beno Udrih – The goods: 17 pts. and 5 assists per game as a starter. The best (only?) mid-range shooter on the team.

The not-so-goods: Non-existent. This is the best ball that Udrih has played in his life. The question will be how productive he will be once Martin returns.

Andres Nocioni – The goods: Andres has improved his trade stock and become more valuable to the current Kings squad at the same time. I don’t see Noc as being in the long term rebuilding plan, but I sure don’t have an issue with him staying here, either.

The not-so-goods: Will we still feel warm and fuzzy about Noc as Greene and Casspi continue to develop and Garcia returns?

Omri Casspi – The goods: Are you kidding? Did anyone see 22 minutes a game for this kid after summer league? Or 9 pts., 4 boards per game? And the guy is tougher than Kenny Thomas’ tax liability on payday.

The not-so-goods: 3-16 from the free throw line before hitting his last 6. Casspi is currently better from 3 (43%) than the free throw line (41%). Westphal has said that this is a result of Casspi being a little too amped up when he gets to the line (the same applies for Brockman).

Donté Greene – Donté is only getting about a minute and a half more playing time per game, but he has more than doubled his scoring. Greene is shooting 56% from the field (33% last year), and there is no comparison when it comes to his defense and overall court presence.

Ime Udoka – The goods: To paraphrase Jerry Reynolds, Udoka is the one guy that you can put on the floor with any four other players, and you will get the same positive contribution. Udoka is definitely a guy that takes what the game gives him, and he rarely hurts you. He is a good guy to have until Martin and Garcia return, and he will probably be a good teammate if he is retained after that (think Ty Corbin).

The not-so-goods: Behind Kenny Thomas, Jon Brockman and Truck Robinson on the depth chart.

Sergio Rodriguez – The goods: Best assist/turnover ratio on the team (2.8/1).

Jon Brockman – The goods: A rebound every 2 and a half minutes.

The not-so-goods: Sean May is taller lying down than Brockman is standing up, and that’s a shame. This motor deserves a bigger vessel.

The not-so-goods: Woof? I’ll give Thomas credit – he’ll never contribute to the size of his contract, but he is contributing.

Paul Westphal and staff – The goods: They have this team playing damn hard, and that’s all that most of us were asking for at the beginning of the season. Westphal has not been afraid to play the youngsters at important moments of the game (of course, as young as this team is perhaps he has no choice), and he has been communicative, appreciative and firm with his squad.

The not-so-goods: I don’t know. There have been those that have questioned some of his in-game decisions, but I’m just to giddy to quibble right now. All I wanted at the beginning of the season was for the last two minutes of the game to matter. To this point, my wish has been more than granted.