Has Donte Greene Changed His Game?

Share All sharing options for: Has Donte Greene Changed His Game?

Given the recent explosion of The Donte Greene Show, I thought it'd behoove us to look at what's really changed in Donte's game. Has it been shot location ... where he takes his shots? All data from Hoopdata.com. 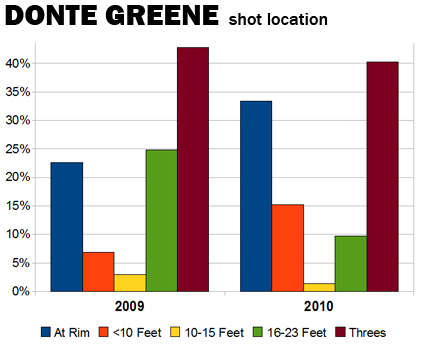 There have really only been minor changes to Donte's shot location chart: he has replaced half of his 16-23 footers (the worst shot in basketball) with shots at the rim, in the paint and in the short mid-range. Greene has only cut his share of shots which come from behind the arc a small amount -- from 43 percent last season to 40 percent this season.

The real change in Donte has been his efficiency: he is hitting his shots. On threes, Greene has an eFG% of 72.5 percent this season. Last year, it was 39 percent. A monumental difference.

There's one more potential answer: when Donte pulls the trigger. Last season, every three Greene hit was assisted. But we all remember ton of threes off the dribble -- none of which, apparently, went in. This season, upwards of 93 percent of Greene's threes have been assisted, which means he has hit a few off the dribble. But -- while there are no public numbers which can confirm or deny it -- I'd venture that Donte has taken far fewer unassisted three-point attempts.

Whatever the case, it's working right now, and we all hope it continues.