The Rookie-Sophomore All Star Game And Your Sacramento Kings

Share All sharing options for: The Rookie-Sophomore All Star Game And Your Sacramento Kings 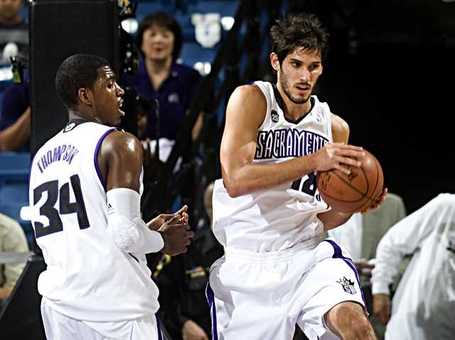 (via media.sacbee.com) Omri Casspi (right) muscles a rebound away from Jason Thompson (left) during section214's imagined rookie-sophomore basketball game. Not pictured - Tyreke Evans, who is off somewhere not being a true point guard.

I know that there are a lot of folks out there that could give a flying fig about all star weekend. And while a part of me agrees, there is another part that remembers the civic pride that Sacramento felt when Mitch Richmond made his first all star team, when he brought home the all star MVP award, and when Peja dominated the 3-point shootout. Jason Williams' rookie game elbow pass, Gerald Wallace getting jobbed out of the slam dunk trophy – all star weekend had our attention back when the Kings were fun and exciting and relevant.

Well, relevant days are here again. While no Kings are likely to suit up for the main event on Valentine’s day at Arlington Stadium*, there are several candidates that could play in the rookie-sophomore game. In fact, if the game were held today, we would probably have three Kings playing, with a fourth just missing.

(*Regarding Arlington Stadium, the NBA should invite World B. Free and Purvis Short to come out for a jump shooting competition to see if either one of them can hit the scoreboard with their high, arcing jumpers.).

First, let’s introduce the 11/29/09 version of the sophomore team (and remember, these teams are selected with little or no regard to position):

Westbrook, Lopez and Gasol are easily the cream of this crop. JT makes this team with relative ease. Speights could lose his spot to the New York and international influence for Gallinari. Donté Greene would probably need Beno Udrih to miss significant time to have a legitimate shot at making this team. Notable absence – Kevin Love may return to the T-Wolves (fractured left hand…SOFT!!!) by mid-December. Two months of solid play could land Love on the soph squad. It should also be noted that Greg Oden (12 pts., 9 reb. 2 blk.) played for the rookie team last year after missing his actual rookie season due to micro fracture surgery (SOFT!!!). If Oden is considered for the soph team, place him with Westbrook/Lopez/Gasol and bump everyone else down a notch.

It sure looks like a two-horse race for rookie of the year at the moment, as Jennings and Evans have really separated themselves from the pack. Collison’s numbers could drop once CP3 returns. Blake Griffin is supposed to be suiting up by December, which should be plenty of time for him to play his way onto this team (the fact that he’s the #1 pick won’t hurt his case, either). Casspi will benefit from being the first Israeli born player when it comes to the selection process for this squad.

The Kings and Nets should get some national love from this game, as they both will have three participating players. OKC should also receive some props for their backcourt of tomorrow.

This would be an exciting game for Kings fans. How many times will JT foul Tyreke Evans (I choose 6!)? How many times will Evans be called "not a prototypical point guard" when compared to Jennings and Flynn? Rose v. Evans? Could we get some practice footage of Casspi v. Williams?

I know – all of this is a bit premature. But for the first time since 2004 (Brad Miller and Peja Stojakovic), the Kings would be represented at all star weekend. And that has me excited and giddy and enthusiastic and unapologetic.

Bring on the game.