Forty-eight points in the home opener might go a long way toward getting Kevin Martin to the NBA All-Star Game for the first time. But a $15,000 check for Indonesian student players might do just as much good. 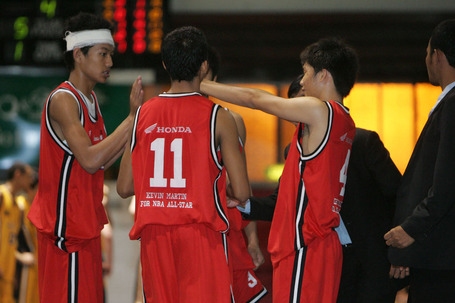 As a thank you for funding their trip to a tournament in Perth, Australia, the DetEksi Basketball League's All-Star team placed a special message on the backs of the jerseys: "Kevin Martin for NBA All-Star." You can see it in the above photo, courtesy of DBL Indoensia/Jawa Pos. If you'll remember, Martin gifted his $15,000 NBA stipend over to the DBL after his visit to Surabaya, Indonesia, to serve as a coach for a training camp for Indonesia's top 24 boy and top 24 girl players. The cash allowed the DBL All-Star team to participate in the Perth tournament. The squad did win a game in Australia, defeating the Western Australia All-Stars on Oct. 24.