Share All sharing options for: Jerry Reynolds Needs Our Help! 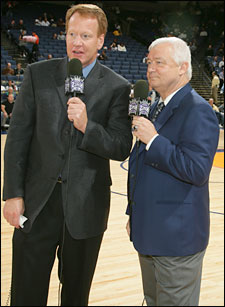 Jerry Reynolds (right) is a tool box of knowledge. Peaches (left) is just a tool.

How about Jerry Reynolds (right) is a fountain of knowledge. Peaches (left) is just a drip.

All righty - The tree of Jerry Reynolds yields much knowledge, but Peaches is just a fruit.

I was listening to the Rise Guys this morning, and on comes Jerry Reynolds. I need text alerts or something to advise me whenever Reynolds is going to be on, because he is always informative, insightful, and damn funny.

This morning was no exception. The thing that struck me as I listened to Jerry is that he gives us so much and asks for so little in return. And I feel guilty about that. I mean, on the one hand, I did buy a copy of "Reynolds Remembers." On the other hand, I have loaned it out freely instead of making people go out and buy their own copy. What to do? I mean, what do you get the man that has (done) everything?

And then Jerry gave me the answer. He mentioned that the folks at StR were giving him a hard time over his difficulty in attaining a decent nickname for Omri Casspi. I can relate to Jerry’s problem. My literary punchbowl is 5% punch, 5% punch-like substitute, and 90% unfiltered turd. Jerry Reynolds is in a creative chasm, a place that none of us ever want to find ourselves.

The Rise Guys tried to console him by telling him that even the greatest baseball player can’t hit a homerun every time (or something like that), but you could tell Jerry was darn near inconsolable. Our opinion means everything to Jerry Reynolds – it is what gets him up and out of bed every morning. Jerry Reynolds needs our help. Jerry Reynolds has cried out to Sactown Royalty for help. We cannot fail Jerry, or we fail ourselves. If we cannot get this done, Jerry has no nickname for Casspi, and that means a few more seconds of air time for you-know-who (rhymes with beaches).

Now, we had some nickname posts a couple of months ago, but I want to zero in on Casspi, and provide Jerry with a thread full of options.

My personal favorite has been NoceOne’s "The Playa from Judea." But this might be a little too Semitic for JR (but man, how I would love to hear that on the air), so things like "Omri Casspi is Torah-riffic!" or "Omri Casspi – he isn’t just for break-fast anymore" is probably way, way too Jewish for Mr. Reynolds. "Omripotent" or "Omripresent" gets us closer to a genuine Jerryism, but they may lack the homespun warmth that you find in "Beno-Draino" or "The Brock Ness Monster."

So let’s get it together, people!  We boast a high 3-digit IQ here, at least collectively. Let’s deliver for Jerry. You know that he’d do it for you.