The Death of the Box Score, and Jason Thompson

Share All sharing options for: The Death of the Box Score, and Jason Thompson

The New York Times picked either the best or worst weekend to published Michael Lewis' beautiful treatment of Daryl Morey and the 'moneyball' of the NBA. With All-Star Weekend and the impending trade deadline, there was the opportunity for it to slip by without much notice.

But the immense thirst for deep analysis of basketball has helped it shine their the fog, and everyone's talking about the story and the meat behind it.

I promised a short Kings-focused analysis, and it took me a couple reads to really sort through some of the wheat in there. Obviously, one of the huge takeaways is adjusted plus-minus. Morey not only uses it in Houston -- he can rattle off Battier's seasonal marks, the marks for the league leaders, and Battier's career figure. Suffice it to say that Morey thinks plus-minus is important.

As such, you'll be happy to learn Jason Thompson has a Top 50 adjusted plus-minus. 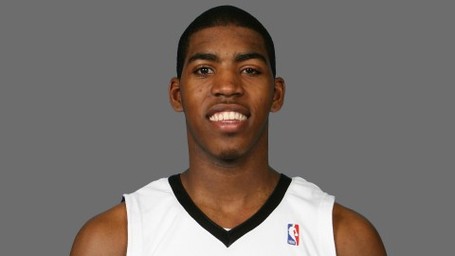 Thompson's at +4.35 by BasketballValue.com's calculations, which is near Kobe Bryant, Ron Artest, Marcus Camby and Luol Deng. Brad Miller actually makes a Top 50 appearance in two-year adjusted plus-minus, based mostly on the strength of his 2007-08 performance. BV seems to differ a bit from Morey's work -- Battier is rated lower on BV than Morey indicates he is in Houston's system. But the general structure and results seem similar. This means that Thompson has a real impact beyond his points and rebounds.

Here's a passage from Lewis' story:

[I]f you want to know a player’s value as a ­rebounder, you need to know not whether he got a rebound but the likelihood of the team getting the rebound when a missed shot enters that player’s zone.

We don't have publically accessible zone rebounding data. But we do have on-off rebounding data. So we know through box scores that Thompson is the team's best rebounder. Does he also help the team as a whole rebound better?

Yep. BV's data shows that the team's offensive rebound percentage increases from 26.1% to 29.4% when Shock is on the floor. The team's defensive rebound percentage increases from 65.2% to 69.9% with Thompson playing. Both boosts are among the league's best (#13 on defense, top 25 on offense). As this is adjusted for teammates and opponents, Mikki Moore shouldn't have much impact in these figures.

There's one last thing to address here: scoring efficiency. As Kevin Martin fans, we know all about the importance of shooting efficiency vs. scoring numbers. The average NBA player scores 1.08 points per shot attempt this season. (A shot attempt is a FGA or a pair of FTAs.) The Kings average 1.07. Martin averages 1.18. Salmons: 1.15. Thompson is at 1.08, or average.

Look at the shot charts for Jefferson and Thompson. 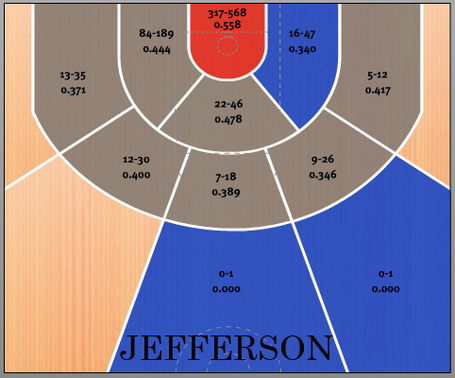 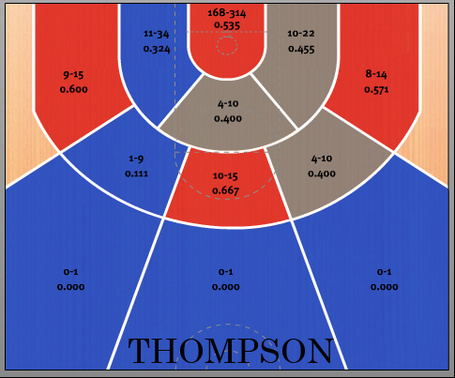 Jefferson has cleaner post moves and finishes better at the rim. But only about 60% of Jefferson's FGAs came around the rim. For Thompson, 70% of his shots have come at the rim. Close-prox shots will always be the most efficient for a big man without three-point range. Seeing more shots there with good efficiency (50% and up is good; obviously some get up to 60%, though) is a boon.

Jefferson has always used up more possessions than Thompson has this year, though. Al has always been a rock, even when he played few minutes. To be an offensive stud (which the Kings need him to be right now), Shock needs to take more shots, have his number called more frequently. And when he gets those shots, we assume a greater share might come from 15-18 feet -- it's just a reality. Look at how efficient his long jumper has been -- better than 50%. Jefferson has a murderous elbow jumper ... and Thompson's is already better (with the usual caveat regarding sample size). J.T. can pick up an extra few shots a game and likely maintain his efficiency ... even without the personal growth we all expect.

I know Shock will clean up those turnovers. (Chris Webber improved in this category immensely under Pete Carril.) You know his rim efficiency will improve (as his left hand couldn't get worse). His defense should improve as he figures out how not to foul, and his defensive rebounding might get a bump from better box-out technique. And plus-minus shows us that without all that improvement he's one of the league's 50 most impactful players.

I am so fricking excited about Shock Thompson.