Share All sharing options for: Revisiting an Old (Failed) Idea 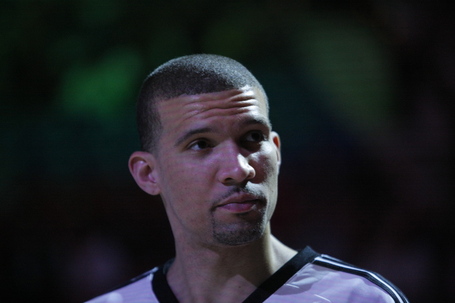 A few seasons ago, Eric Musselman tried (out of desperation) Francisco Garcia at point guard. It didn't work. Garcia relied too much on creating his own shot and was too prone to awful turnovers. But things change ... and things have changed. Garcia's turnovers have been way, way down. The team's defensive rebounding and backcourt defense are as bad as ever. As Garcia has shown a decent propensity to get the ball to his teammates, Kevin Martin and John Salmons have also grown in this respect. The team now has a low post scorer in Jason Thompson. This is no longer Garcia running the show with a gun-shy scoring guard, a timid iso-focused small forward, a Lobster and a burn-out center. With the rest of the roster developed somewhat on offense, Garcia has less pressure at the point ... and he can really exploit some things with his length, quickness and (of course) jumper.

Basketball Value has +/- numbers for every unit every team plays. Here's Garcia's page. Scroll down and you'll see a few line-ups where Garcia is the de facto PG -- you can tell because Beno Udrih, Bobby Jackson and Bobby Brown don't appear in these units. There's Garcia/Martin/Salmons/Thompson/Hawes, which has a net positive 12.3 rating in a little over a quarter's worth of minutes/possessions. (This is adjusted for the opponent quality; the minutes against OKC, for example, are discounted whereas the ones against Denver tend to be boosted.) The Garcia/Martin/Salmons/Thompson/Miller unit is a slight negative, -1.7 in roughly the same amount of action. The Garcia/Martin/Salmons/Hawes/Miller unit has a +28 rating in 11 minutes of work. The three wings with Thompson and Shelden Williams is an even +0 in nine minutes. No other PG-less line-up with Garcia has more than four minutes as a unit.

I'm not saying Garcia at point guard is a magic bullet -- if Garcia started the rest of the season at the point, the Kings would still lose at least 65 or 70% of their games, I bet. But the team needs a few shakes, and for every good Beno performance he offers two bad nights. No offense to the Bobbys, but Brown's defense is currently as bad as Beno's, and Jackson is infinitely better suited (due to defensive reasons) as a firestarter off the bench in limited minutes/circumstances.

One more argument: only about a third of Garcia's minutes have come with Martin also on the floor, due to injuries and the fact that Garcia is basically Martin's back-up. In Garcia's total 730 minutes, he is shooting 43%. In those 250 minutes where he plays with Martin, he shoots 47%. There was a similarly drastic cut last year: Garcia shot 46% overall, and 49% when playing with Martin. Someone to take the offensive pressure off Garcia helps him a ton, especially (it seems) when it's a fellow shooter. To me, replacing Salmons with Garcia is NOT an option ... for so many reasons. But Garcia for Beno? That makes a lot of sense to me.