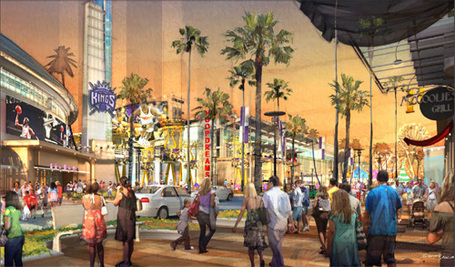 Folks have preached patience, and I'm on board for that. But today the NBA unveiled the plan, a $1.9 billion project incorporating an arena, a brand new Cal Expo, hotels, retail, condos, office space ... everything. It's a massive, massive plan when everything in the world is shrinking. The sentiment coming from the league is (yes) patience -- John Moag said they'll spend a year talking to developers and waiting for the economy to rebound. Shovels will stay in the shed for a while.

But the sheer daunting size of this thing is going to make it harder on the Kings, NBA and Cal Expo than it needs to be.

That $1.9 billion figure comes from the Sacramento Business Journal, and accounts for the entire 8 million square foot Cal Expo site. SBJ has the arena and exposition itself costing $500-600 million, which is on par with the previously discussed (and preferred by most) downtown project. Of course, Cal Expo was supposed to be cheaper and, well, easier. At first blush, it's not cheaper nor easier.

Sam Amick quotes the independent economist as calling the NBA's cost and revenue projections "optimstic" and saying that "this particular project has problems in terms of feasibility."

Cal Expo has posted presentations from Moag and the economist.

Again, I'm on board with the patience train. But a reader emailed me a note that makes a point that's hard to ignore:

Huge overreach. They royally blew it. They have guaranteed intervention on the part of the Legislature.

Proponents of an arena in that area should be very upset today. We asked the NBA to come back with a commuter car, they came back with a Lamborghini. Oops.

Remember, the state owns Cal Expo. Gov. Schwarzenegger has been supportive in the past, but he and the Legislature don't always agree. (Fancy that.) In particular, state Assemblyman Dave Jones (who sits on the Cal Expo board in a non-voting role) has been (and will be) critical of any effort to build an arena at Cal Expo. If the Legislature is required to agree the a bond sale by Cal Expo to finance this thing, you can bet he'll be rallying troops against it. If the plan is flimsy or risky, he'll find more sympathetic ears.

If you go big like this, the reward's greater. These Disneyland allusions and the "city within a city" talk could someday come true. But if it doesn't -- and in Sacramento, there's always a chance it doesn't -- then the fall will be so magnificently huge that the league might never recover around here.

If any piece of this falls short, the whole shebang could crumble. As such, the NBA is taking a massive risk here. But hey ... the Kings can find a new home if it all falls apart. Sacramento getting another pro sports team ... that's a different story.