Share All sharing options for: The View From Section 214, 2/6 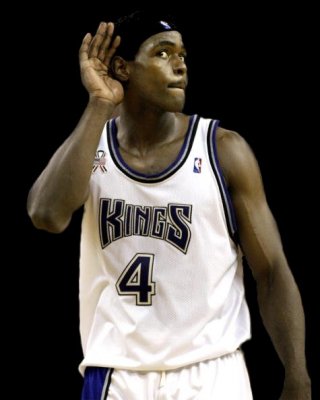 I envisioned this night a long time ago. I did not envision that Kenny Thomas would be in attendance, much less still be on the roster.

We walk in and we are handed lithograph posters. I ask if I can have a couple of rubber bands so that I may roll up the posters and the girl complies, but seems less than thrilled. I notice that there are several posters already bundled, and I ask if I may have one of those instead. The girl responds, “No, those are for when we get busy.” I respond, “You mean those are going to stay there until 2012?” Mrs. Section214 gives me a polite ginsu knife to the ribs and we move on.

We sit down and the first highlight that we get on the jumbo tron is Webber laying John Stockton out with “The Pick.” This is going to be a great night.

The next video clip is the TNT gang giving Kenny Smith a hard time because he has never had his jersey retired. They proceed to give him an in studio retirement – his Rockets jersey hanging from a clothesline with laundry pins, surrounded by other laundry. Great stuff.

As the clips roll on, I come to the conclusion that Mitch Richmond may have been a great (maybe the greatest) Kings player, but Chris Webber was a star.

I sure hope that this team doesn’t suck the energy out of this building by halftime, because there is a bit of a buzz in the arena right now.

The Maloof’s are sitting courtside – I believe that this is the first time this season that Joe has made it to the floor. He looks a little thin.

Webber is introduced and I get a little misty.

Pollard, Divac, Christie and Mateen Cleaves are in attendance.

We end the 1st quarter with 8 assists to 3 turnovers and 4 blocks. Who are these guys?

Mrs. Section214 does not seem to appreciate my rendition of Iggy Pop’s “Lust For Life.”

JT just accomplishes the most difficult of NBA tasks – an assist to Mikki Moore.

JT all alone on the dunk and Jerry Sloan swallows his tongue. That is one angry tenured coach, my friends.

We start talking Salmons trade rumors and the guy behind me remarks that Salmons has been involved in every rumor except being the 2nd shooter on the grassy knoll. I respond that if you have John Salmons you don’t need a 2nd shooter. I crack myself up sometimes. Mrs. Section, not so much.

Is that Trevor Wilson sitting next to Scot Pollard? And if it is, should I be worried that I can actually recognize Trevor Wilson in a crowd?

It’s so crowded that there are lines at the urinals. At least, that’s what Mrs. Section tells me…wait…a…minute…

No turnovers for the 2nd quarter. Who are these guys? 55-45 good guys at the half!

Not much going on, so I head outside for some fresh air.

Gary Gerould is the master of ceremonies. I’ll bet this just singes the fuzz off of Napear’s peaches.

A huge ovation for Christie, but everyone gets on their feet for Divac.

Webber is tearing up a little bit, and now I’m starting. I’m glad that the lights are down. I’m a wuss.

Mateen Cleaves’ smile is just like Magic Johnson’s. And they both went to Michigan State. And they both won National Championships. And that’s where the comparison ends.

Christie quotes Julius Caesar. With Jackie nearby, that’s as close as Doug is going to get to Roman around.

What kind of tool do you have to be to boo the Maloof’s at this ceremony? A-Holes.

B-Jax gets in on the group photos at the end of the ceremony.

Mitch Richmond’s retirement was recognition, this was a recollection. This was awesome.

The crowd seems a little worn out, as they have probably cheered more tonight than they have in a couple of years. And it seems that the full house is sticking around for the 2nd half.

The crowd is still into it, as we’re down by 3 heading to the 4th.

Sign Man is here. I guess that not everything about the past is worth remembering.

Tied with 11 minutes left and the crowd is chanting “Defense! Defense!” Silly crowd.

Back and forth – we can’t hit free throws, and the refs can’t seem to get their calls right.

2 minutes left and the place is rockin’.

They play the old Christie “get the crowd excited” tape, and it gets a great reaction, especially from Divac, who thinks that it is absolutely hilarious. Yes, the players are still here watching the game and the place is still full.

The finish – it's probably in the game thread - some offensive fouls that looked really bad from where I was sitting, and Deron Williams is one strong sombitch. Kings lose 111-107.

Observations – Nice game by K-Mart, but he turned it over too much. It was fun watching Thompson and Hawes get after it. You can tell that veterans like Okur take advantage of Thompson’s youthful exuberance, but the kid will learn. Matt Harpring was a dickhead, is a dickhead, and will always be a dickhead…unless the Kings obtain him at some point.

Tonight was fun, even if I did have to roll up my own poster.