Let's get funky with NBA Hot Spots data. First, here's the straight map of Spencer Hawes' shooting quality this season: his FG% in different zones of the court. 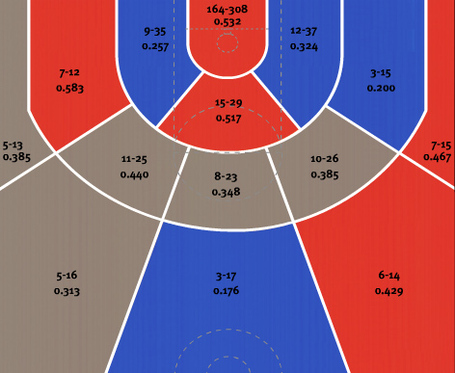 Now we'll add the quantity: how many of Hawes' shots came from each distance? (Note: I'm combining zones at this point: rim, close, long two, threes.) 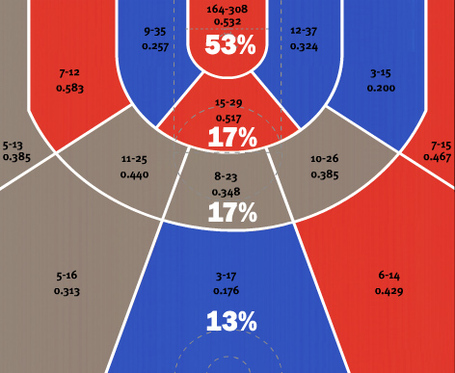 Let's look at this in chart form. just the basics: frequency and quality (expressed as effective field goal percentage to denote the greater point value of threes).

Hawes is good at the rim, basically league average among those with a lot of shots inside. And he's a fine deep shooter (at least this season), with 26 makes in 75 attempts -- roughly 35%. That may not seem good. But look at the chart again, and remember that threes are worth 50% more than twos. That extra point is a huge difference. Shooting 35% on threes is the equivalent of shooting 52% on twos. (For instance, Kevin Martin's incredible 43% on threes is the equivalent of 65% on twos.)

So good at the rim, good from deep -- he can improve in both areas (by finishing stronger and setting his feet on his long ball). But the real improvement is needed in between: the short game and the mid-range game.

Look at the Hot Spots on the "close" range again. From each baseline, it's absolutely brutal.  In front of the rim, it's good -- this is where Hawes takes a runner, or a flip-up off of a spin move into the lane, or one of those gorgeous running hooks. Yes, the running hooks is gorgeous.

The baseline turnaround hook? Hideous. Maybe that's a step too far -- they do look good ... but they rarely go in. This is all really sort of amazing to me. Hawes is still growing into his body and skill set -- he can be a bit clumsy. (See: turnovers, defense.) As we've said, he needs to work on setting his feet on his deep shots. His limbs tend to flail a bit -- not so much his arms/elbow, but his hips and legs. So you'd think that'd be the case with his running hook, right? Well, yeah. And he does look a bit out-of-control. But it works! It goes down consistently. Why? My theory is that the movement of the move has the defender off Hawes' face a bit -- there's some more separation. Hawes doesn't get much (if any) lift on any shot other than the dunk. The 6-10, 6-11, 7-foot defenders don't bother his baseline hook ... but they can body up and keep a hand in his face. They can't do this on the running hook, lest a foul call or spin move leave them brokenhearted.

Hawes' footwork -- the spin move, the up-and-under, the deke -- help him get room on the running hook. Against poor defender, you'll notice that Hawes infrequently turns to the running hook -- because it's unnecessary. As soon as he gets the ball on the block he has easier plays to the rim (typically a spin at this point ... which is to say Coach Reef is teaching him well). These easier plays don't always work out (read: turnovers, slow moves allowing help to arrive). But they exist, and Hawes tried to take them.

But the footwork seems to be little help on the baseline, where there's no room to operate. Hawes works quickly down there, usually passing right out to the perimeter or flipping up the quick hook. These quick hooks (almost) never go down. I'm not sure why -- it could be a sample size issue (although they didn't go down last year) or a particular tic that throws the whole thing off. Assuming it's an unfixable tic -- the Achilles heel of Spencer's offense -- there are still some fixes.

1. Set up on the block instead of deep against the baseline. This is on the guards -- the delivery of the ball is what secures position at any particular point. The ball needs to come closer to the middle of the floor, which means it needs to be a crisper, quicker pass before the hands start flying in from the top. Hawes need to catch these cleanly.

2. Try to back down defenders. Spring a guard (Francisco Garcia or Kevin Martin would be the best options) to the strongside wing. Hawes isn't STRONG, but he's strong. He can try to push in and get a better angle (using his footwork) than the baseline hook. If it's not working, the guard can get loose and receive a pass for a jumper or a drive. Passing out of the post doesn't necessarily require a double team.

3. Face up and get some spring. Yao Ming should be the only NBA player Hawes can't get a decent 8-foot baseline jumper over.

Brad Miller and Chris Webber made them, sure. Jason Thompson can make them. Mikki Moore made them. Spencer Hawes isn't making them. In this offense, he has little reason to take them. He's a featured scorer, not the distributor/fulcrum Miller has been. Get Hawes to the block or stick him in a high pick-and-roll a la Deron Williams/Mehmet Okur. But there's little reason to have Hawes at the high post in a corner series or quasi-triangle set right now. How many Martin/Hawes pick-and-rolls have we seen this season? Two? Three? Need. More. Screen-rolls.

Hawes' shooting percentage, for a big man, is hideous right now. But the fundamentals are strong, and he'll get there. He'll get there quicker by taking better shots and by the team running more sensible plays.