Donté Greene Digs His Own Grave

Share All sharing options for: Donté Greene Digs His Own Grave

O lord, what hath you wraught. From Amick, with a photo from KHTK's Jodi Bacon:

After the rookie's car was the latest to be filled with popcorn for failing at his rookie duties, Greene vowed revenge ... and exacted it on Jackson's car today. 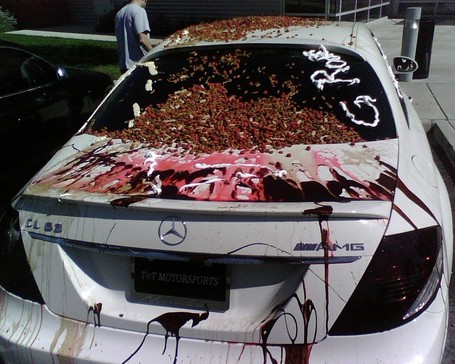 This mixture of dog food, soy sauce, ketchup, and mustard left an awful stench on the vet's ride. There was chocolate on the car, too. [...]

On a far more serious matter, this whole agent brouhaha linked in the FanShots by pookey has a lot more to do with the state of agentry than the two players (Donté and Kevin Love) mentioned. By account of the original Yahoo! Sports story, Ceruzzi Sports (an agent firm) paid off an AAU coach to try to get Love to choose Ceruzzi. (Love did not.) The same firm gave Donté's uncle a $50,000 loan with the idea of bringing Greene over; D.G. told Amick that he had a falling out with said uncle before the story broke, and Syracuse coach Jim Boeheim said Donté didn't know about or touch the loan money, and "never listened to his uncle about anything." (The cash was for an entreprenurial enterprise.) And, in an important footnote, Greene also did not choose Ceruzzi to represent him. There's nothing here that fingers D.G. as dirty.

Again, this whole thing doesn't really have much to do with Love or Greene. It has to do with how slimey agents -- particularly the clowns running Ceruzzi -- can be. But the Syracuse Post-Standard did have some quotes from Boeheim on Greene's background that I'd never heard:

Boeheim said Greene did receive a sizeable insurance claim when his mother died while working for the National Security Agency.

"He had money from his mother. People don't realize she was in the service and he got a bunch of money; she passed away in the service. He got quite a bit, a substantial amount.''

I knew D.G.'s folks were in the service employ of the government-- he was born in West Germany and spent a few years there. But I didn't know his mom died in the service to the country. (See update below.) There's a lot we don't know about our Kings.

UPDATE: pookey correctly notes that the NSA isn't a part of the Armed Forces. Updated to fix.