The Changing Face of Kevin Martin

Share All sharing options for: The Changing Face of Kevin Martin

Kevin Martin has had a weird season. Two things about his offense have been particularly gasp-worthy (one good, one bad): his three-point shooting has been incredible, and his two-point percentage has been horrendous. 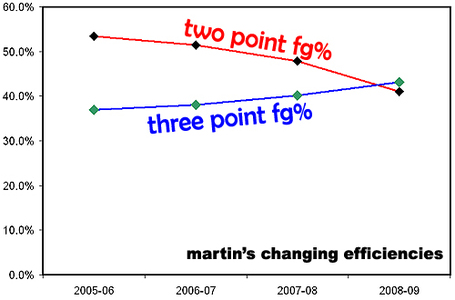 (I omitted the limited-minutes rookie season, of course.) Martin's three-point shooting has improved every season. But his two-point shooting has done the opposite -- all the way to the tipping point this season, in which Martin actually shoots better from three than inside the arc.

Let's go on a hunch and assume the three-point shooting has gotten better because Martin is working hard at it, and making sure to take better shots from behind the arc.

So why did shrinking two-point FG%?

One theory would be foul-drawing. As we know, a huge part of Martin's game has been getting to the line. Is he driving with the hopes of getting to the line only to frequently not get the call and having to throw up a bad two-pointer?

The Cavaliers do an excellent job packing the lane. Keep an eye on Kevin's drives -- to be honest, his ball-handling limitations hurt him when the defense adjusts appropriately. He doesn't have the knack for regularly hitting the open teammate in the lane or in the corner. (He has gotten better, but isn't in the same league as dishing wings like Kobe, McGrady, Iverson.) Part of this also is that his teammates infrequently get open, too. But my hunch is that Martin wants more than the refs are willing to give in the paint.

Of course, this is all relative. Martin is still No. 4 among all 20-point scorers in True Shooting percentage. If he can bump his TS% up a bit more, he'll join the exclusive club of players with three straight 20-ppg/60% TS seasons: Amare, Reggie Miller, Jordan, Barkley, Bird. (Martin actually came a fraction of a point within 20 points per game in 2005-06, which would have gotten him into the club.) This is all to say that although we grimace at Martin's current two-point shooting, he's still one of the most efficient high-scorers in modern NBA history.