We are the angry hippo.

The lions prepare to feast on the carcass they have studied from afar. Unexpectedly, we rise to the challenge, vital and fierce. Eventually, we get bored and/or scared and go show for a swim. The lions feast. 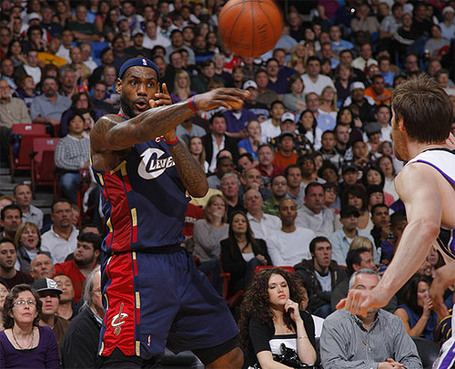 Last week, Bill Simmons wrote an excellent column about a Cavs-Clippers game in which, with the Clips leading by double digits with seven minutes left, fans at Staples Center began discussing how the home team would lose. You're a liar or a neo-romantic if you didn't have a thought or two during the fourth quarter about a potential Kings loss.

But here's what makes Kings fandom a better deal than Clippers fandom: you could also see scenarios in which the Kings would win! I mean, Kevin Martin was an absolute monster heading into the few minutes (when, not coincidentally, he retracted from Beast Status as LeBron switched onto him). The front line (especially [ahem] Jason Thompson) had a strong night, Andres Nocioni looked like his head could pop off any moment, Bobby Jackson and Will Solomon came out like Wolverine and Nightcrawler. The team played at such a high level that a win seemed not only possible, but plausible!

Or maybe I'm just one of the neo-romantics I mercilessly mock.

* Kenny Natt, for all intents and purposes, ensured the Kings will have a new head coach next season. I'll credit two decisions, both pertaining to (you guessed it) Thompson.

But the key here is that Joe and Gavin Maloof saw all of this. They might be inarticulate on the radio and TV, but they aren't stupid. They saw the egregious mistake and the beautiful possibilities. The Kings will have a new coach this summer.

* Waiting for LeBron to switch onto Martin was like doing blow off railroad tracks. You know that train is coming, but there's no sense in worrying about it til it happens, right? Right <train horn> "Oh shi..."

* Speaking of which: a couple weeks ago, I asked we tone down the cursing in the game threads. Last night: 78 f-bombs in the thread. I'm frowning right now. Maybe you can't see it (I hope you can't see it, you stalker freak), but I am frowning. So (ahem): please chill on the cursing. The English language is full of so many colorful words. In fact, I'm handing out recs for non-curse colorful words going forward. Be colorful without being blue!

* Finally, Nocioni didn't stop LeBron (of course). But if you watched, you know that he gave every ounce of himself for this game. Sam Amick Melody Gutierrez has a great quote from Noce.

"I left my effort, my energy, everything on the floor, but it was for nothing because LeBron played really well. I tried to play physical, but he's really big. He's strong, fast. It's really frustrating for people like me to try to stop him because you cannot do it."