The Art of Being a Spoiler

Share All sharing options for: The Art of Being a Spoiler

Oh, how I missed Kings Basketball.

I'm not talking about the four-day lay-off between games -- I didn't really miss the Kings much last week. Sure, some mornings I'd wake up and feel as if I had no purpose because there was no awful turnovers to criticize or shot selection to bemoan. I mean, with no Kings basketball, what's a man to criticize and bemoan? But no, I didn't miss the physical act of watching an awful team, The Worst Team.

I have missed Kings Basketball though. Sensible movement, crisp passing, smooth shooting. Transition ... the extra pass ... the roar of the ARCO faithful.

Since 2007, we've only had glimpses of Kings Basketball. Sunday night offered once such glimpse. It might be seven months before we get another glimpse. But for those two hours when the circuits connect and the sparks fly, hell it will be worth all the gnarly content in between.

* The Nuggets had an effective field goal percentage of below 45%, while their season average to date is over 50%. The defense -- especially around the perimeter -- worked.

* Career high for Spencer Hawes with 20 points. The team's rebounding was absolutely atrocious -- Nene had five offensive rebounds, and Chris Andersen had three. But it's hard to fault Hawes much, considering how untouchable his offense looked.

* Andres Nocioni looked good, hungry in the starting line-up. He jumped out early to assert some sort of Kings attitude ... and it worked. 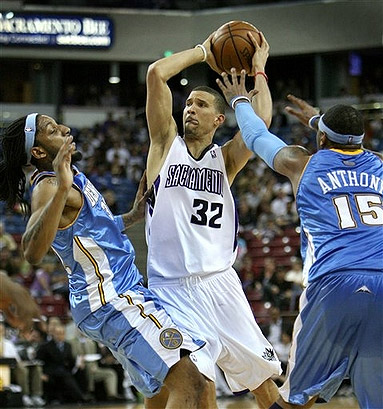 Francisco Garcia is a man, man.