The Case For Mike Budenholzer

Share All sharing options for: The Case For Mike Budenholzer 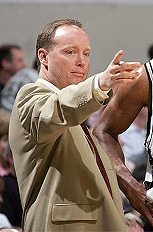 Given Woj's Yahoo! report and common sense, enthusiasm about Eddie Jordan as the next Kings coach makes complete sense. I probably don't need to remind you how enthusiastic I was in December about the E.J. prospects. Jordan makes sense from a logitistical standpoint, would indicate Petrie's back in charge, and makes the team better and more exciting. Wins all around.

But I must say the overwhelming enthusiasm for him is a bit surprising. He won 40% of the votes in the first straw poll! He won more votes than Jeff Van Gundy, Avery Johnson and Tom Thibodeau combined! Maybe we're all sons (and daughters) of Carril, but really ... I'm surprised. Not disappointed, but surprised.

I am disappointed so little credit was given to my vote, Mike Budenholzer. Four votes. Four. Half as many as John Freaking Whisenant, the Maloof buddy choice. (No offense, Whiz. But ... you know.) Budenholzer is Gregg Popovich's top assistant, his right-hand man. And the general manager of the Sacramento Monarchs has twice as many endorsements as him. WHAT!

I realize, though, that I have done a piss-poor job making a case for my candidate. (Yes, I voted for Bud over E.J.) I linked a mess of Bud content in a comment a few weeks ago, but I didn't put it together in any sort of compelling fashion.

If you take away nothing else from this endorsement, let it be Gregg Popovich's own endorsement. Budenholzer has been on Pop's bench for 13 seasons, since Bud was 25 years old. Pop told SI's Chris Mannix this last fall:

"First of all, Mike has a wonderful understanding of the game," Popovich said. "That's a requirement. He's really good relationship-wise, too. He's secure in his own skin and he's able to tell a player the truth whether the player wants to hear it or not."

Bud was a finalist (along with Elston Turner, Tyrone Corbin and eventual choice Terry Porter) for the Phoenix job last summer. It was the first job in which Budenholzer was really considered. During that interview process, Pop offered another endorsement -- "[he] would make a fine coach in the NBA,without a doubt."

When Steve Kerr wrote for Yahoo!, he offered this anecdote in a January 2004 column on the importance of scouting and knowing your opponent.

The perfect example of all of these defensive factors coming together occurred at the end of Friday's San Antonio-Phoenix game. With the Spurs clinging to a two-point lead, the Suns called a timeout with three seconds left to set up a play.

San Antonio assistant coach Mike Budenholzer grabbed a clipboard and diagrammed a play that he had seen Mike D'Antoni run late in a game against Chicago several weeks ago. It's a beautifully designed back-door play that attempts to draw the defense out to the perimeter and then counter with one player making a quick cut to the rim for an open layup.

Budenholzer repeated to Hedo Turkoglu several times during the timeout, "Don't follow Joe Johnson to the three-point line! They're setting you up for a back door!" When the play developed, the 6-foot-8, 230-pound 2-guard Turkoglu started to feel himself drawn to the perimeter but remembered Budenholzer's advice, stayed at home and broke up the play. The Spurs hung on to win.

More recently, Budenholzer has been single-handedly teaching Drew Gooden the Spurs' system. Further, and less Bud-specific, work by Dean Oliver has indicated coaches can affect defense more readily than offense. Scott Skiles' impact in Milwaukee would seem to reiterate this.

I guess the general sentiment involved on my end is this:

The Kings have a long way to go in every facet of the game. The offense is bad, with tools available but ineffective implementation rampant. The defense is beyond awful, with only the most minor shreds of material to work with. After four coaches in four calendar years, it's time for stability. How better to make a move in stability's direction than to hire Gregg Popovich's right-hand man, a kid no one has anything bad to say about? Doesn't the top assistant of a coach who has won four titles in the last decade, has a 67% winning percentage (63% in the playoffs) -- doesn't he merit consideration? What's the problem here?

(And don't give me P.J. Carlesimo. That's a completely separate thread unrelated to Bud.)