I got over it last night before I went to bed. Credit the rum.

I'm back to being "not over it" today. I feel like I've been dropped from a jet at 15,000 feet, wearing a shirt of galvinized steel and a parachute made of Michael Sweetney. I'm not feeling alive.

This topic tag cloud at the bottom of Sam Amick's story on the disaster seems right. 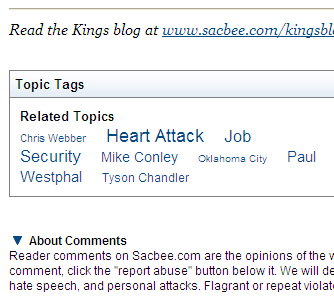 The Kings had to lose three times on Tuesday. What were the odds of each loss?

Once Memphis' 75 combinations were removed from the pot, the Kings had a 33.4% chance of winning No. 3. FAIL.

The ball numbered 1 was obviously never drawn -- the Kings and Wizards held all combinations which included that digit. Twelve Sixteen (!) times a ball came out of the hopper ... and never was it the No. 1 ball. (Edited: the Clippers won No. 1 and No. 2.)

This really, really sucks. Even when skill and talent and coaching and execution don't matter, the Kings still can't win.