The Five Stages Of A Geoff Petrie Draft Pick

Share All sharing options for: The Five Stages Of A Geoff Petrie Draft Pick 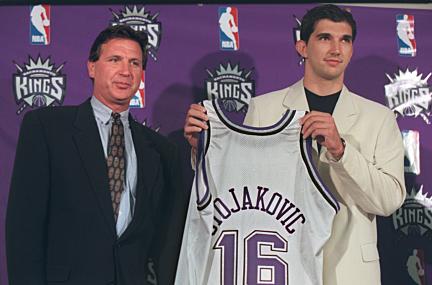 WTF?!? John Wallace is on the board and we drafted Freedrag Toy-whose-a-vich?

During the Griffin/Rubio draft board recap, I traded back and forth with otis29 about breathlessly anticipating the StR draft day thread after Geoff Petrie drafts someone other than Griffin or Rubio with a top two pick. Simply, the threads that followed the drafting of Spencer Hawes and Jason Thompson were classics. One StR member jumped off the Burg Dubai upon the Hawes selection, while the JT thread (which had to be extended not once, not twice, but three times) was bounced around the web as some of the funniest/saddest/angriest draft conversation in the history of Al Gore’s internet.

Petrie hasn’t had a lot of lottery picks over the years, but the ones that he has had have often been unconventional.

Bottom line, Geoff Petrie can surprise people with his picks. And while I cannot imagine in a million years that he would pass on Griffin and/or Rubio to draft someone else, we must prepare our collective psyche’s for the unimaginable.

Inspired by otis29’s comments and draft threads past, I present the five stages of a Geoff Petrie draft picks:

DENIAL – “He didn’t draft that guy, did he?” “There is no way; they must have effed up the announcement.” “I’m having a nightmare; I just have to make myself wake up.”

ANGER – “F*ckin’ Maloofs! Now they have their noses in the draft!” “I’m done – where is my old Kareem jersey?” “I’m going out, and I won’t be back until I find a neighborhood cat to torment.”

BARGAINING – “Hey, we can change the pick as long as the next team hasn’t picked yet, right?” “That must have been a pick for another team – there must be a trade in the works. Yeah, that’s it.” “Come on, baby. Wake up…wake up!!!”

DEPRESSION – “I hate my life.” “Gee, maybe whenever we give up 100 points they’ll give out straight razors.” “We’re doomed as doomed can be.”

Please study this easy guide. The 2009 NBA/StR draft day thread is less than two months away, and we don’t need anybody booking trips to Dubai.