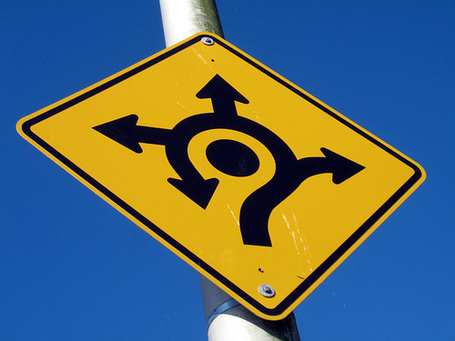 Sigh.  I long for the days of yesteryear. More accurately, I long for the days of yestermonth. It was barely a month ago that 97% agreed that either Blake Griffin or Ricky Rubio would look best in a Kings’ uniform. No one else mattered. It was a draft of two studs and the rest duds. Two heroes and a gaggle of zero’s. Two gold nuggets a batch of douche nuggets. Let everyone else try to mold lumps of coal into diamonds. Our minds are made up. Hasta la vista, baby!

Then we got kicked in the (ping pong) balls, but good. I’m still peeing blood, or at least Bloody Mary’s. Griffin and Rubio were seemingly gone, and we were relegated to making chicken salad out of something that sure wasn’t chicken salad (you may substitute that line with "trying to make a silk purse out of a sow’s ear" or "trying to make a point guard out of Quincy Douby").

Then the funny stuff started to happen. Rumors began swirling that Ricky Rubio might still drop to #4. Our reaction was disbelief, followed by cautious glee, followed by distrust. Rubio must be aging exponentially, because according to his detractors he has seemingly lost a step or two over the past month, his jumper has gotten worse, and he no longer is interested in playing defense.

Thankfully, Ricky is but one of eight candidates that various "experts" have coming to the Kings with the #4 pick (and that doesn’t take into account the fact that Chad Ford has three different guys coming here all by himself!). I can’t recall this much volatility at the top of a recent draft. There are guys predicted to come here that could be gone by #4 (Rubio, Harden), and guys that might not even land in the lottery (Holiday, Flynn, Curry). There are mysteries (Jennings), tantalizing questions (Evans) and a guy that no one around here seems to want (Jordan Hill). And the worst part? You can’t trust Geoff Petrie as far as you can throw him. He could cross up everyone and take Demar DeRozan or Peja Divacoglu.

The one thing that these guys all have in common is an elevated amount of risk. One or more of these guys might become all stars someday, and a couple of guys will probably be busts. The problem is there is no way of really distinguishing the Baby Ruth’s from the doodie’s at this point. It is literally a crap shoot. To wit –

Ricky Rubio – The most exciting, and the most likely to become the face of a franchise, with the potential of eventually returning a certain franchise to national prominence. He is the guy that will make his teammates better, guaranteed (note – guarantee is not guaranteed). Questions include his availability (will he be drafted before #4, will he even come over this year?), his athleticism, and his ability to do "Good Feet" and "Folsom Lake Toyota" ads.

Tyreke Evans – Long, quick, confidant, engaging…but enough about me. Evans size and length is enough to make you tingly when you think about him sharing a backcourt with Kevin Martin. But questions abound as to whether he is really a distributing point guard. My opinion is that this stuff is a little overblown. CP3 and Deron Williams are not exactly bashful about scoring, but because they handle the ball every time up the floor they have the opportunity to fill up a stat sheet. I’m not dogging these guys – I would take either one in a heartbeat. But if the Kings are going to continue to run a version of the Princeton, a guy like Evans that can be an effective slasher could come in handy. Of course, he would also need to be able to hit open jumpers, which has been a question. But let’s remember that fellow Memphis alum Derrick Rose was not exactly a light’s out shooter in college. Rose added almost 20% to his free throw shooting alone as an NBA rookie. Just sayin’.

Brandon Jennings – By tomorrow, we will probably know a lot more about Jennings’ as a player. The knock on him is that he has not flourished in Europe. But did anyone notice that Josh Childress booked less than 9 pts. and less than 5 boards per game in Greece this year? The point is his Europe stats are meaningless. There have also been questions about his attitude, but no one can seem to reference the how’s or where’s or why’s of these alleged issues. I have nothing to go by here but gut feeling, but I think that Brandon Jennings will be an NBA player, and perhaps an NBA star.

James Harden – Harden could possibly be gone before #4. Harden is apparently a marketing major, as he was attempting to sell the Kings on the idea that he could play the point. Again, in the Princeton it would be an interesting concept. But the thought of Harden chasing Tony Parker and the such around NBA floors…well, at least he would work off the rest of that body fat. Harden should be at least a solid pro in the right situation. I’m not sure that Sacramento is the right situation.

Jrue Holiday – Brandon Jennings, part 2. This guy had always been a point guard, but he moved to the two so that he and Darren Collison could play in the same backcourt at UCLA. As a result, now there are questions as to whether he is a point guard. And because his numbers (again, at the two) were less than enthralling at a school that runs a very deliberate offense, his overall talent has come into question. He is slotted to go anywhere from #4 to the tail end of the first round – amazing. Worst case scenario, this guy is Kyle Weaver, not a guy that you’d draft at #4, but a guy that will always find work in the NBA. Best case scenario is > Rajon Rondo.

Stephen Curry – I see this guy and I see Mike Bibby. I swear, it’s Mike Bibby! And not $14 million a year Mike Bibby, but young, not expensive, and willing to fill his role on a team Mike Bibby. The concern should be less about whether he can play the point offensively. The concern is whether he is quick enough to chase opposing point guards.

Jordan Hill – This guy would be playing 25 minutes a night for the Kings in a very short period of time as the roster is currently comprised. An Ike Diogu or Marcin Gortat could change that a little bit. I get the feeling that if Hill didn’t have the same hair stylist as Mikki Moore, Kings fans wouldn’t be so cool on him. That said, he certainly lacks the…what’s the word that I’m looking for…help me out with this, Ailene…the sex appeal of most of the other candidates.

Demar DeRozan – The list wouldn’t be complete without a swing man. DeRozan has not been discussed here as much as the other guys, primarily because we don’t want to go through the mental gymnastics of figuring out how he would fit on a roster with Nocioni, Garcia and Greene. But the guy is said to be a talent. And I just don’t trust GP…

Well, there it is. Less than two weeks until the draft, and we don’t have a freakin’ clue. And we have not even touched on the #23 and #31 picks. I hope that you can all make the draft day thread. It should be epic.

And 1 – I will put up a draft contest later next week. You will have an opportunity to submit your predicted picks, with the winner eventually perhaps winning a prize of some sort, maybe. I say this because defending champ "Ball In Cup" is still awaiting his StR t-shirt (still in development) from last year. And he has not complained once. You the man, Cup!