Share All sharing options for: Introducing the Box Model 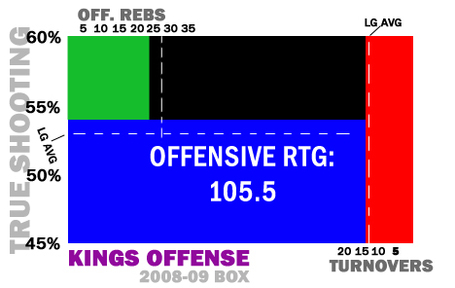 I think visually, and to that extent spatially. I've been thinking about this particular idea for a while -- how can we explain a team's performance in a completely visual way? It's not perfect (yet), but I think I have something here: the box model.

Everything an offense can do is in here. (Conversely, you could do an identical one for defense. I might flip it upside down, though.) Remember the Anatomy of a Possession? All of that is in here. Everything good or bad fits into offensive rating, and it all fits right here. (This is one reason I chafe at criticisms that advanced statistics do not capture everything that happens in a basketball game. Capturing is not the problem -- the final score of a game actually captures everything. The problem with advanced statistics right now is one of identification -- how do we pull out the information we need without also getting information which might cloud our judgment? But the capturing of total information, we have that.)

The red field represents turnovers. It grows right to left -- you can the Kings were very slightly worse than average in turnover rate this season. The blue field is point scored. The big deal, the bread and butter of an offense. This can grow two ways. First, a decreased in turnovers (red) opens up the field for shots (blue, green, black) more. Second, a team's shooting percentage affects the height of the field. I use True Shooting percentage because ...

What about other factors of the game?

* Assists. Those fall into shooting percentage. Though there is no discernible relationship between assists and shooting at the team level, studies have shown a decent increase in individual shooting percentage when a potential assist has been made, something like a 8-10% boost. (So someone who shoots 30% on pull-up threes would theoretically hit 40% of his catch-and-shoot threes. Theoretically.)

* Screens. Again, shooting percentage. Screens in particular get pointed at as a facet of the game stats can never capture. And no, there's no public statistical assessment of the value of screens. But they are counted in the big picture, assuming there's a substantial of a good screen versus a bad screen (a theory I subscribe to).

As we can see from the specific Kings offense box model, the fundamentals of the Kings offense are strong. The team shoots above league average (thanks, Kevin), the turnovers are not completely out of whack. Simply by virtue of Spencer Hawes becoming a more efficient offensive player (which I think we all believe will happen) and by virtue of the guards (including Kevin Martin -- it's not all on Beno Udrih) turning the ball over less frequently, the offense will improve. It was No. 25 in the league last year, but it can be much better, assuming some health for Martin and (again) improvement for Hawes. Replacing Mikki Moore with Jason Thompson for a full season will help. The No. 4 pick might not help that much, but it could be a big immediate boon. We'll see, but I'm fairly confident in the ability of this offense to get much, much better.

The defense, on the other hand ...