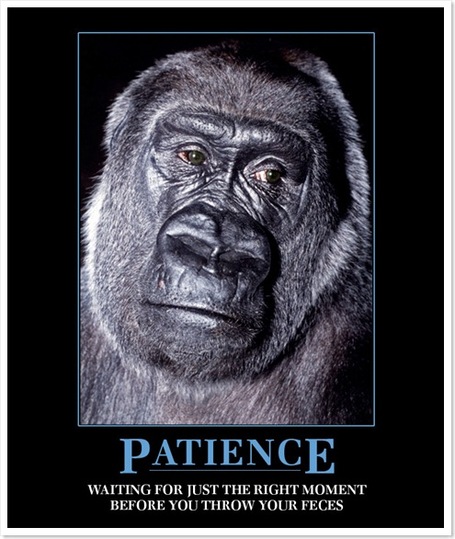 The rebuilding process takes time.  And, as TZ pointed out, we have time.  What we seem to be lacking is patience.  The turnaround will not happen overnight, but it is easy to become restless over the summer.  We have less to talk about than usual, and it will only get worse now that Summer League is over.

With the summer heat and the lack of new information, we become desperate.  We devote our afternoons to Sean May comment threads.  No offense to May, but his biggest problem in coming to Sacramento is that we don't have much else to talk about right now.  We're busy grasping at any piece of Kings news that we can find.

Well, it is time for us to grasp the idea of patience.

So, how can we practice patience?  It starts with us not declaring Tyreke Evans the savior, or a steal.  He's played in 5 Summer League games.  Sure, he looked good, but let's wait until he's shown his stuff in regular season games.  On that same note, let's not declare that he will never be a successful point guard.  Again, he's played 5 Summer League games.  He's 19.  Let's see what he grows into.

Along those lines, let's also slow down on Donté Greene.  Donté is another young player, taken late in the first round of last year's draft.  I'm not saying he'll be a bust, I'm not saying he won't be a bust.  I'm saying he played limited minutes in one season, it is too early to pass judgment.

We must also practice some patience when we're considering free agents and trades.  There's been a lot of talk about trading players.  Kevin Martin, Beno Udrih, Andres Nocioni, Jason Thompson, Spencer Hawes, and Donté have all been mentioned recently in trade discussions.  While I'm not suggesting that any of these players is untradeable, I think the trade proposals have been inspired by a desperation for something, anything, to happen.  But this team cannot afford to make moves out of desperation.  Not now.

Nobody enjoys meaningless banter more than I do, so please don't misinterpret what I'm saying.  I'm not saying that we shouldn't discuss trade scenarios or ways to improve the team.  That's what we're all about.  And I'm just as guilty of some of these behaviors as anyone.  But we need to relax a little.  Barring a miracle, the Kings aren't championship contenders next season, regardless of what moves are made.  When the games begin, we can go back to jumping to conclusions.  Until then, let's follow K9(woof!)'s lead and just relax a little.