As I look forward to the upcoming season, I am both excited for the possibilities and fearful that I am looking at this team through my fan inspired beer goggles.  In order to relieve myself of my anxiety, and to fill the gaping void that appears every summer, I took it upon myself to do a little research into the history of NBA losers.  Specifically, those teams that have found themselves in our present situation of being the worst team in the league.

Specifically, I was looking to answer three basic questions:
What happens the season after a league worst showing?
Is improvement to be expected, and if so how much?
How long will it take to win again?

After recording all the information about this select group of NBA misfit teams from the 1984-1985 season all the way to our own season of super suckage, I found that our record of 17-65 is pretty much a middle of the road number of losses for a worst of the worst team.  Therefore, I decided to use simple averaging to figure out what the answers to my questions might be.

Question #1- What Happens the Season After a League Worst Showing?

This is an area where optimists can take heart, because the answer appears to be things get better in the short term.  In the season following a worst in league showing the team usually doesn't repeat the experience the next year.  In fact, since the 1984-85 season only 4 times have the worst teams repeated their performance the next year and never have they had a three-peat.  Furthermore, in only one case did a team that was the worst team for a season have a worse record the next year than it did the first year and only one other team failed to improve upon the previous years record.  Therefore, in my estimation the Kings have a better than average shot of having a better year next year than they had last year.

Question #2- Is Improvement to be Expected, and if so How Much?

I think in finding out the answer to Question #1, I can say that yes, improvement over last year is to be expected and is supported by the historical record of previous biggest losers.  That still leaves us with the question of how much improvement can be expected.  To find this I measured two different indicators of success: Ranking records relative to the rest of the league and the change in the number of wins from one season to the next.  An average of ranking the records from best to worst showed that we can realistically expect the Kings to be somewhere between the 5th and 6th worst team in the league next year.  Furthermore, an average of change from one season to the next shows that we can expect the Kings to win between 9 and 10 more games next year which means a record of 27-55

Question #3 - How Long Will it Take to Win Again?

Hello pessimists!  If your still following me, this next set of data is probably going to make you feel justified and leave everyone else horrified.  On average, it takes a team that has hit the bottom of the league between 4 and 5 years to put together a winning record. So it looks like we can realistically expect to wait until the 2013-2014 season to have a winning team again.

Now that I have answered my questions, not that I like all the answers, I can comfortably go back to my fan inspired beer goggles and ignore everything I have learned and just hope, pray, wish, and use every bit of superstition I can to will the Kings to a better season than the one we endured last year.

For those of you interested in seeing the chart that I compiled this information on here it is : 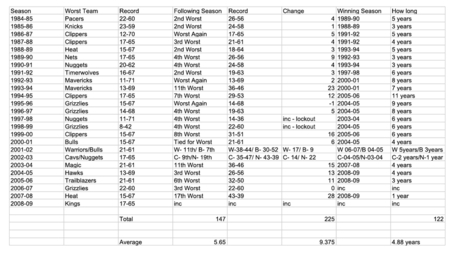