A Tale of Two Teams: The Lakers and Kings Since 1986

Share All sharing options for: A Tale of Two Teams: The Lakers and Kings Since 1986

It has never been this bad.

The Lakers have dominated the Kings in the standings during the Sacramento era. In the 24 seasons the Kings have spent in California, the Lakers have finished with a better record 21 times. It's completely improbable, highly unfair and entirely depressing. (Never mind that one of those three Advantage: Kings seasons ended with ... well ... let's not get into it.)

The Lakers have dominated the Kings for a quarter of a century, but it has never been this bad. The gulf is so wide is might as well be an ocean. The Pacific Ocean. The Lakers are L.A. and we're Kamchatka. It's painful. Take a look after the jump. 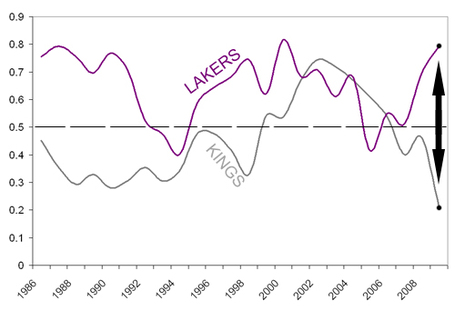 Last season, the Lakers won 48 more games than the Kings. The next worst disparity between the teams during the Sacramento era: 1989-90, when the Lakers won 63 games and the Kings won just 23 -- a 40-game difference. That is a terrible, terrible disparity ... and this season was about 20% worse.

There's no real reason to point this out, other than to note how far this team has to go. We talk about being .500 in 2012, or contending in 2014. The pay-off will be sweet. But bloody hell that's going to be a long march! Hope you brought your walking shoes.