Share All sharing options for: Dinner & Enthusiasm With Paul Westphal 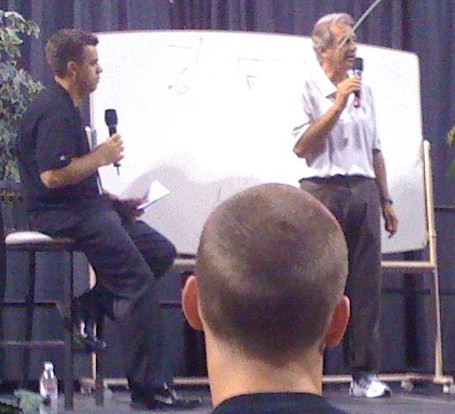 I am amongst this "special" group, a group that you would reference for Kings history but not for financial advice. A group that you would call on when you need optimism over realism. There are roughly 1,300 accounts that have eclipsed the ten year mark, so I’m guessing that translates into somewhere between 3,000-4,000 fannied seats per game. This group could (and at times should) occupy a psych ward far past capacity.

Kings management decided that this group of fans deserved sympathy  sucking-up-to  extra perks. We are entitled to our own special t-shirts (if I put this into high school currency, this would be less like a letter jacket and more like a band shirt). We get a special newsletter (I have not been asked to be a contributor). And there are special "Legend" events.

One such event took place last evening.  600 "Legends" were treated to dinner and a question and answer period with Paul Westphal. Dinner was served on the floor level of ARCO Arena. Beef tenderloin, Chardonnay chicken, green beans, mixed vegetables, mashed potatoes, salad, bread, dessert. As has always been the case, when the Kings do these things, they do them right. The food was very, very good.

The questions were submitted when you reserved your space for the dinner. This is a good thing if you’ve ever been to one of these events and you’ve had some jackass stand up and complain about the notch in the cup holder on his seat. This is also a good thing because it allows for some pre-editing, just in case a fan (who shall remain nameless) submits a question like "Coach, what kind of ice cream would you be, and why?" (for the record, I am "Rocky Road," because I am soft, sweet and nuts).

One last thing about this "Legend" business. We take a blood oath, there is a secret handshake (the Doug Christie "high sign" to Jackie is part of it but that’s all I can tell you), and we are sworn to secrecy. What I am about to share with you is highly classified, and I could have my "Legend" status revoked if I am ever found out. I have taken every precaution to make sure that this does not happen. For the purpose of this post, please refer to me as "section 215," and everything will be Jake.

Scott Moak was the master of ceremonies. I will say this for Moak – every time that I catch him at these events, I see a guy that genuinely enjoys what he does. Westphal was quickly introduced, and for the next hour-plus he fielded the questions delivered by Moak. I didn’t have the time (or the battery life on my phone) to write down the questions, but here is the crux of what Westphal had to say –

·         Westphal said that the most important thing that a coach can do is figure out ways to highlight the strengths of his team and hide the weaknesses. However, he does not feel (for example) that the way to mask a team’s defensive deficiencies is to slow down the game. You can tell that Westphal has a disdain for coaches that have the reputation for being "defensive minded" primarily because their teams wait 20 seconds to shoot the ball on offense, thus greatly reducing the number of possessions per game. Westphal has no interest in losing games 85-78 and then taking a hollow victory in the guise of improved defense.

·         The main goal for this year is improvement. Win or lose, the goal is to improve the individual player and the team as a whole. The focus will be on getting better, always getting better.

·         Westphal stated that coaches can’t win games, but they can sure lose them. He expanded on that by saying that a coach and his staff can put a team into position to win, but the players are ultimately the ones that execute. On the other hand, the failure to provide coaching leadership can doom a team. Westphal referenced Red Auerbach, who once implored his Celtics team to follow the plan. (Paraphrasing) "Even if it’s a really bad plan," said Auerbach, "if you all commit to it, it still just might work!"

·         Westphal noted that players can/will lose playing time if they do not play hard.

·         Spencer Hawes and Jason Thompson were mentioned on several occasions by Westphal. You can tell that he wants them touching the ball more (especially Hawes), and that he wants Hawes working more in the low post, noting that Spencer’s free throw attempts per game are way too low.

·         Westphal also stated that the team was amongst the smaller teams up front at the moment, and they would either need to add another big man, or be ready to play small. At this point, Thompson would be spending time at the 4 and the 5.

·         Tyreke Evans is a basketball player. It’s what he does, and it’s all that he wants to do. Evans plays and approaches the game the right way. Westphal re-visited Evans’ handling of Johnny Flynn and Brandon Jennings in pre-draft workouts.

·         Omri Casspi was jet-lagged and a little unprepared for the level of competition when he got to Las Vegas. Because of the timing of his arrival, he had to learn the offense and defense on the fly. But he improved every day, and Westphal thinks that Casspi will be a bona fide NBA player once he learns the NBA game and life.

·         "You’re going to love Jon Brockman," said Westphal, which is in an interesting comment about a guy that is still technically a non-roster player. Westphal says that Brockman is not an offensive force, but what he will do is rebound, rebound, rebound.

·         Coaching staff primary (but not sole) responsibilities – Jim Eyen is the lead assistant, and his strength is knowing the NBA and the opponent (including the opponent’s verbiage). Mario Elie is focusing on perimeter defense. Truck Robinson is rebounding. ‘Reef is working with the big men and scouting. Bryan Gates is the gap filler, doing a little bit of everything.

·         Coaching staff and 1 – Pete Carril will be focusing on shooting. When Hubie Brown improved Memphis, Westphal asked Brown how he did it. Brown stated that it was an emphasis on shooting that made the difference, and that for all of the things that get attention, the art of shooting is often overlooked. Westphal went on to say that a 1% improvement in shooting and a 1% improvement in defensive shooting percentage could translate into 10-20 wins all by itself. By the way, the fans in attendance love them some Coachie.

·         Finally, in regards to why he wanted this job, Westphal said, "Are you kidding me? This team won 17 games last year. There is nowhere to go but up!" Westphal elaborated that to be on the front edge of the resurgence in Sacramento is exciting, and he relishes the thought of the players and the coaching staff bringing the fans and the excitement back to ARCO Arena.

All in all, an outstanding evening. Kudos to the Kings for thinking of it. Final thought – I would challenge anyone to spend five minutes with Paul Westphal and not be excited about him being here. I really think that he is the right guy for this team at this time. Let’s get this party started.