Getting Spencer Hawes to the Line

Share All sharing options for: Getting Spencer Hawes to the Line

Our friend section214 section215 talked Rorschach ice cream tests with Paul Westphal on Friday, and one of the takeaways was that the coach wants to find ways to get Spencer Hawes to the line more. Why? Free throws are among the most efficient ways to score. Five trips to the line will almost always result in more points than five field goal attempts ... for almost every player in the league. Further, foul trouble can eliminate opponent defenders, and the more fouls a team draws the quick the opponent is in the penalty, begetting further free throws.

So yes, Coach Westphal is right on in calling for better foul-drawing from Hawes. This is an area where Jason Thompson is much further ahead. To wit: 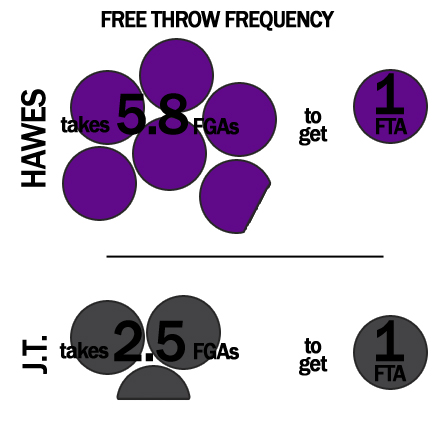 We'll look at shot types for the pair later this week. Of course, the frequency with which a player shoots from the lane is part of it. Westphal discussed that, commenting that the staff would seek to get Hawes more paint touches. But that's not the entirety of the issue.

Offensive rebounding is a big driver of free throws -- when you pull down an offensive board, you're in great position (near the rim, most likely) to get fouled. (The numbers bear this out: league-wide, free throw frequency and offensive rebounds per minute have a 0.44 correlation coefficient.) Getting back on defense is important, but hitting the offensive glass is a huge boon for offensive efficiency. The staff will have to decide how to balance the issues, and Hawes himself will have to make strides in fighting for contested rebounds. That will help brings these free throw numbers up, and make the Kings more potent on offense.