Outside-In: Where Jason Thompson and Spencer Hawes Shoot the Ball

Share All sharing options for: Outside-In: Where Jason Thompson and Spencer Hawes Shoot the Ball

Going back to Paul Westphal's comments last weekend regarding our favorite center, Spencer Hawes: the coach said he'd like to set up Hawes in the post more. We saw this inconsistently last season -- Kenny Natt basically decreed Hawes as a post player for, like, two games, and otherwise the coaches tried to force Hawes (a slender shooter with some good footwork but flawed touch at the rim) to play like Shaq. It didn't really work. Hawes was best last season when playing his game -- shooting, passing out of the high post, filling the lane on the pick-and-roll.

Little is ever made about Jason Thompson's offense, perhaps because he had a successful rookie season. He scored well, and efficiently, and he hasn't been billed as the next great Kings center as Hawes has. There's less attention paid. But by my count, he counts every bit as much on the court as Hawes, and every time we wonder how the staff can best use Hawes, we ought to wonder the same about Thompson.

The first step in that is understanding how they were used last season.

Using 82games.com's data, I put together this graphic showing the distance from which each player shot last season. It's broken into three categories: three-point range, two-point jump shots, and "inside." Note that "inside" according to 82games (which yanks data from play-by-plays) is a bit different than that found through the NBA's Hot Spot data, which uses actually shot charts. 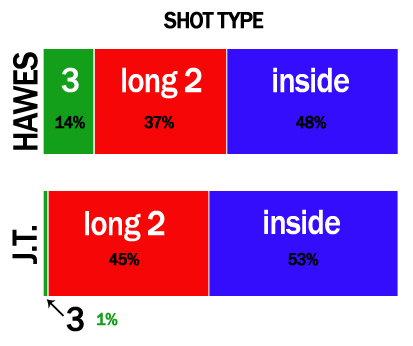 As you'd expect, Thompson never shoots the three ball, but he does rely on two-point jumpers an awful lot (especially considering the number of putback attempts he draws). All told, Thompson take just over half of his shots from inside, while Hawes takes just under half from there. The two-point jumper is (by category) the worst shot in the NBA, with a catch: most of the most prolific offensive players in the league (Wade, Nowitzki in particular) tend to hit the long two at a good clip. Thompson actually takes a higher share of his own shots from the long two range than does Hawes, who attempted quite a few threes (at a good clip -- .348 -- especially for a 7-foot 20-year-old).

The three-point shot is far, far more efficient than the two-point jumper. If you hit 35% from three-point range, you would need to shoot 52.5% from two-point jumper range to have the same efficiency, to create the same points. No one in the league shot that well last season. Jason Terry led the league in long two FG% at 49.2%. So Spencer needs to keep taking those threes, at the expense of some of those long twos. (I should note Hawes's FG% on long twos is barely more than on threes, and the long twos don't come with the benefit of an extra point for makes.)

Thompson? He needs to be focusing on the inside game. Only two rookies (Marreese Speights and Brook Lopez) turned a better inside FG% than Thompson (who finished 60.9% inside). Combine that great (and likely improving) finishing percentage with Shock's ability to draw fouls and soak up offensive rebounds and ... he was made for the low post.

The great thing is that our fellows are versatile. If Hawes has a match-up which dictates he move to the post, Thompson has the supreme ball skills to move out high and space the offense. If one or the other is in foul trouble, each is flexible enough to adjust to the forward/center who rotates into the game. Offense is not going to be a problem much longer for these cats.

It will, of course, be defense which decides whether Shock and Hawes works as a legit starting frontcourt. And, honestly, a lot of that comes down to Tyreke Evans: Can he rebound enough to lessen the frontcourt's problems on the defensive glass? Will having a point guard who tries to slow opponents help the backstops get into position better? We'll see.